The continuation of the interview can be read in this news. Click on this link for the first part, second part or third part.
Interviewer: Steve Lieb
Anton Bolshakov of GSC Game World
SGO: Does the engine support environment-mapped bump mapping?
AB: The game does not use a 3D accelerator. Thus, bump mapping and environment-mapped bump mapping technologies are not implemented. To play EW, one need any DirectX compatible video card with at least 1 MB of video RAM.
SGO: The game editor – how does it bring in real world topographical info? How long does it take to edit a single scenario like a single battle for example? Easy to use, or mainly for experts?
AB: You scan a topographic map of any real terrain and save it, say, in *.BMP file. Then you load it into the editor, and it use the heights’ mapping to model the game terrain as much close to the real topography as possible. For instance, the editor won’t model the real height of Everest. However it will be the highest mountain on the map. Then you use your time for creativity: paint your level with different textures, place trees, stones, water, resources, military forces, buildings, etc. To create a mission, one need from several hours to several days, depending on how thorough developmental work you need to do. Of course, first one need some time to get used to the map editor, but no special education needed. I would say, the editor is for a middle-experienced player. Also I inform that the editor will not be shipped along with EW: we simply won’t be able polish it in time. However the editor will be uploaded to the Interned for free downloading or shipped with add-ons. 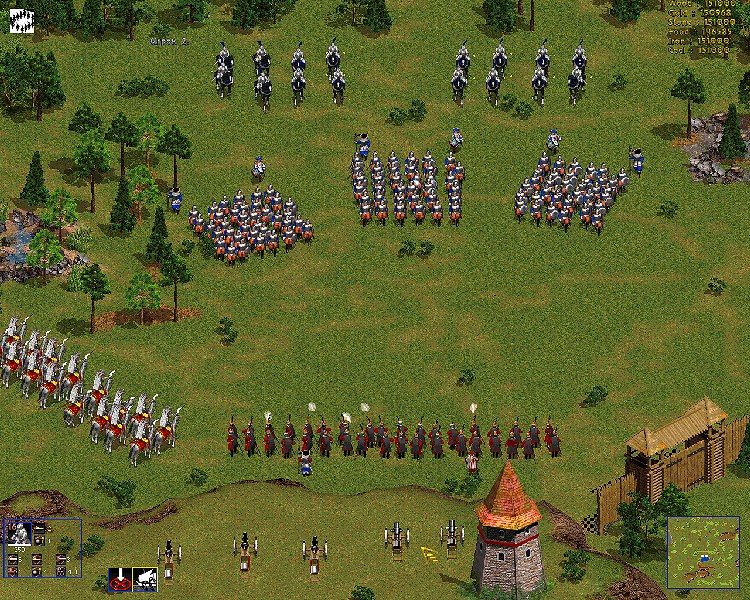 SGO: Are the campaigns all taking place in a single game, or are they a series of scenarios?
AB: There are several separate campaigns in the game. Each of them is dedicated to specific famous historical events.
SGO: Multiplayer – how many simultaneous players?
AB: 7 players via network, modem, or Internet. The 8th nation is neutral, i.e. in network game options one can turn one the additional neutral nation to be present in the game. A neutral nation is, for instance, bandits in the woods; they will raid on your settlements now and then. The other example is sea pirates, etc.
SGO: Can a new player jump into a game in progress, or must he be there at the start?
AB: A player can join the game only at the moment of game creation, i.e. after the game was started nobody can join it.
SGO: How long does a typical battle take (time)?
AB: Playing through one single player mission take from half of an hour to several hours. Skirmish mode, Historical Battle, and Deathmatch take from several hours to several days. Anyway it depends on game options and rivals’ level. One can save any (single or network) game for later loading.
SGO: Speaking of that – how is religion modelled in the game? Combat bonuses vs. certain units?
AB: Church is a spiritual bulwark of the army. A Priest is supposed to raise morale of single units and military formations. A morale parameter is not implemented in our game, so a Priest’s blessing increases units’ attack and defense parameters.
Well, that pretty much exhausts the questions I’ve had about EW:WS. To me it looks like a cross between AoE & 7k, with a strong touch of Imperialism thrown in. In any case it looks like a great game that we are eagerly anticipating here at the SGO Corporate Tower!
Anton, thank you very very much for the time. For the readers, they should all be reminded that I barraged Anton with these questions in English, and he suffered through translating, answering, then translating the answers back into English. This is not an easy task, and I want to point out that none of his text was edited for clarity – clearly we can expect that their English-language conversion of EW:WS will be very high quality. Once again, Anton, our thanks.