The continuation of the interview can be read in this news. Click on this link for the first part or second part.
Interviewer: Steve Lieb
Anton Bolshakov of GSC Game World
SGO: Ships – I’ll be curious to see how you compare their strengths, as I understand that the Xebec was very maneuverable, but was rarely even nearly a match for a 4th or 5th-rate line ship. Are there national differences in the ships as well (i.e. historically French and American ships were much tougher than English) and crews?

AB: Each vessel type possesses series of individual parameters, such as movement speed, weapons type, number of cannons, health points. Also there are ‘economic’ parameters – production and maintenance cost – but let us put them aside in the question. We tried to reconstruct advantages and drawbacks of real ships in real battle. Thus, for instance, a Yacht is light and the most quick vessel in the game. Frigates are almost as quick as Yachts. Battleships are not best in maneuvers, but are real naval fortresses – much health points, many cannons on board. A Galley is armed with a mortar, so it can shell coast targets over terrain irregularities, etc. As to vessel differences for countries. There are differences not in parameters, but in fleet structure. For example, a Yacht is the most powerful ship Ukraine can build. In Russia Battleships appear only after a player proceeds to the XVIII century. Same vessel types of different nations possess same sets of parameters. However, in the game process some parameters may get better (for instance, via upgrades). As to American navy (you probably mean famous American frigates), events in EW do not deal with America at all. Our add-on will be dedicated to colonial wars and American war for independence, so USA navy peculiarities will be depicted in the add-on. As to French fleet, the question of French vessels’ superiority is really in question. Of course, some peculiarities of French ships (a higher cannon deck, etc.) make them better than English ones, but English shipwrights and naval commanders had their know-how too – after all, Britain was considered a great sea power for a very long time. Moreover, Englishmen used to copy French vessels (frigates in particular) and imitating the best achievements. Hence, there are no significant difference between French and English fleet.

SGO: How are territory & resources controlled – is it by region (like “I captured Silesia!”) (ala Imperialism) or is it based on the individual things on tiles (“I captured this gold mine”) ala Age of Empires?

AB: Territory and resource management is done at specific objects – a-la Age of Empires. However in single missions and campaigns one can capture whole villages and cities. For example, after starting a mission with a tiny squad, a player can reach a small village and capture it, then this settlement will be managed by the player. 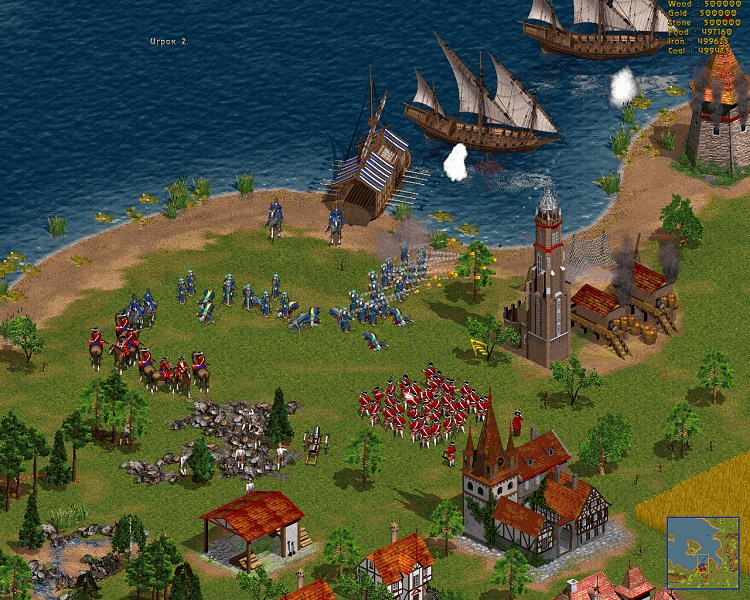 SGO: Is the government modelled, or is it just “the player can do everything”.

AB: There is no government in the game. A player should deal with all state aspects himself – developing economy, science, forming armies, conducting battles.

SGO: Is there weather and weather effects? Climates?

AB: There are no weather effects – it is a sunny day all the time. The game ‘takes place’ in various climatic zones (Russia, England, France, Turkey). Hence, you can see nature of several climatic zones in the game: woods under the snow, oases with palms, sand-dunes and green forests, rocky shores and mountains.

SGO: Are towns placed in the editor and fixed in the game, or are towns something you can start (colonize) in the game?

AB: There are no cities as solid objects in the map editor. A player has access to a series of buildings to construct a city of any type and size.

SGO: Is there a macro economic model – is there trade with partners, economic benefit of colonies?

SGO: Fog of war – it appears that the fog of war is semi-persistent: the map is black, and as you explore it clears, but only updates near units. Is this correct?

AB: Really, the fog of war closes in some time after a unit has passed. This increases significance of recognizance in the game. Besides, there is a XVIII century upgrade – Montgolflier. After inventing it, a balloon rises to the sky, and the whole map is revealed.

The relief is really ‘full 3D’, but you cannot rotate the map. Like in real life, landscape plays a great role in any battle. Thus, full 3D landscape in the game allows a new level of game playability in comparison with ‘quasi 3D’ strategies. Thus, predominant heights can provide with advantages in attack and defense; occupying a height may even determine a battle outcome. Also narrow canyons are got places to set ambushes or hold off enemy’s major forces; a landscape with ravines will prevent an enemy from conducting instant cavalry charges, etc. The 3D landscape has entailed implementation of world physics. For instance, units climb heights slower, while at a height they see and shoot farther. Shooters, cannons, ships, and towers cannot shoot through hills; thus, for example, a player’s squad will be safe from enemy’s cannons behind the hill. To hit targets behind landscape irregularities, one should use howitzers (plunge firing cannons) and mortars (long range plunging fire). 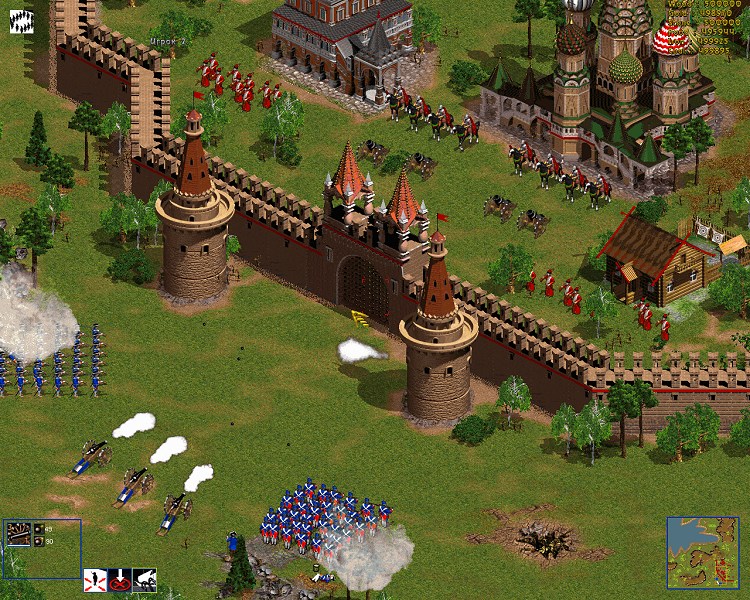 SGO: You state it’s sprite-based graphics, but the figures appear to be little 3d figures – are they pre-rendered and then converted to sprites? That would suggest that if the map is rotateable, it would be fixed at 4 views or 8 views or something.

AB: Unit graphics consists of pre-rendered sprites. As I have said, you cannot rotate the map, however we have paid much attention to making unit movements and turns smooth and natural. A special graphics compression algorithm was developed to achieve numerous animation types (walking, bayoneting, saber swinging, shooting, reloading guns, grenade throw, death, etc.) pre-rendered in 16 directions, and ships and artillery in 64 directions – all these without a noticeable increase of system requirements (compare to 8 pre-rendered directions for all units and vessels in AOE 2). Hence, our units are high-detailed (that is possible with sprite graphics only) and free of common sprite graphics drawbacks – poor animation, jitter during turns, slipping during diagonal movement, etc.

SGO: Is there a “zoom out view the whole map” view?

AB: Unfortunately there is no. Zooming x2 and x4 having been announced at our site will not be included in the final version for technical reasons.

SGO: Infinite gold/coal/iron? In the span of time the game seems to suggest, it would seem realistic that there is a small (unpredictable) chance that mines are exhausted.

AB: If we consider historical events in the basis of the game, the most prolonged was the Thirty Years war. Although the game ‘virtual time’ runs faster than real one, we suppose technologies of XVI-XVIII centuries could not allow working out a deposit during even 30 years. Or, for instance, how many boats would one need to catch all fish in the Adriatic Sea or the Channel? Or how many years would one cut Siberian forests with axes? Or to quarry all the stone of Alpine foothills? Taking all this under consideration, we decided to make all resources except food infinite. Of course, finite resources are rather something you’ve got just used to during ten years of playing Warcraft, ?&C, AOE, etc. with the appropriate economic system. I have discovered infinite resources only in Total Annihilation in 1997. In EW economic system contains many new and original elements: we have tried to create a harmony of economic system and the historical game context. Is it good or bad? Well, let gamers judge.

SGO: Wood – is it a renewable resource?

AB: Wood is renewable, it is infinite.