GSC return with the expansion to their RTS hit Cossacks. This new add-on, going by the name of Art of War, builds on the historical RTS gameplay fans of the original have come to love, adding new features to keep gamers hooked to the screen.

Now that Cossacks has been out for a while, gamers have probably moved onto multiplayer and played the game to death. Art of War spices things up a bit by adding new single player features which include five new campaigns. These new missions are based in the 17th and 18th century for Prussia, Austria, Saxony, Algeria and Poland. This comes to around 30 mission in total which is plenty to keep the single player gamer amused for a whiile. As with the original, the single player also focuses on historical battles, something the more serious fan of Cossacks will get a real kick out of. Art of War adds six new historical battles which include the Battle of Dunbar, Battle of Hohenfiedberg, Battle of Marston Moor, Battle of Newport and the Battle of Rimnik. If you’re not familiar with these then pull out those dusty history books to get the picture.

So there’s plenty of new maps and campaigns to explore but is that really enough? As you’d expect, there are also new factions to play with, Denmark and Bavaria, each with completely new units and structures. Also, to build on the original game GSC have added six new ships and the Prussians have two new units, the infantryman and Prussian Hassar. A new building called ‘log cabins’ has also been added which should stop those pesky rushes at the start of games, garrison up the cabins with up to ten men and watch the enemy suffer. 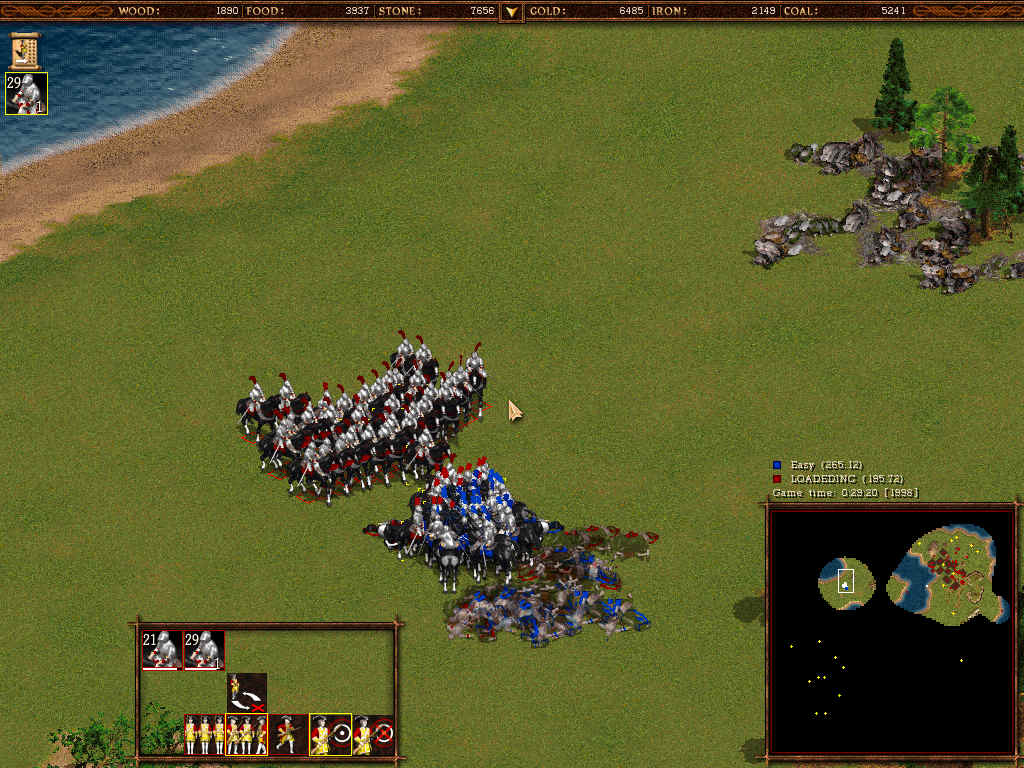 Gamers now have the ability to pause the game while you make those so important strategic decisions. While this takes the ‘Real’ out of the RTS, it does offer something new. How many people actually use this function is anyone’s guess, it’s certainly not a feature that really gripped me while playing. Also, to make things a little tougher for the veteran players there’s now four difficulty settings for the single player and it is an improvement.

With any expansion the most important features are not always the additional units or maps. Once a game’s been out for a while, you have normally become pretty adept at multiplayer games, so it’s always good to see an expansion offer something new for those that have moved online. A completely new ranking system has been put in place which makes the game a lot more competitive and interesting. As you win more games you now climb in rank and title giving you more of an incentive to actually go online and play. Players also now have the ability to form alliances with the computer AI which is an interesting addition and a replay function is included which allows you to watch recorded battles and pick out your enemy’s tactics.

Probably one of the most important additions is the inclusion of formations. Players can now place different types formations, Line, Column and Wedge depending on your strategic preference. Formations can now also be grouped which essentially means you can now move the army as a unit which is pretty impressive to watch, especially now that you can also reinforce a formation if you have enough units once you’re going in for the attack.

I’ll admit I did find it little tricky to get to grips with controlling the units and getting them all in group formations at first but there’s a handy icon at the top left of the screen that reveals the current formations you have created for selection. After a while I found formations became rather too much like hard work as they began to fall apart. Having said that, some players will no doubt embrace the function and put them to good use, although I certainly preferred just putting together a good combo of units with support before going in for the attack not having to worry about what units are going in what formation. GSC have also allow you to set units to guard or patrol which is certainly a welcome addition to the unit control although the patrol system is somewhat limited by a single waypoint.

What is undoubtedly the best feature in Art of War is the editor. This new piece of kit allows you to start putting together your own maps and scenarios. With the maps size now up to 4 times the size, there’s plenty of room for experimentation. The editor has an easy to use interface so you’re not bogged down with all sortsd of weird commands or scripting. It’s a point and click affair which any novice should get to grips with pretty quick which is a credit to the developers. Because the maps are now so much larger, GSC have also added 200 new graphics including plants, animal life and new landscapes of which you can have up to four different types on a single map. Fans of the series will put the editor to good use, it should help them create their own historical conflicts, and hopefully fans will see a flurry of scenarios popping up for download.

Cossacks: Art of War does a good job of expanding on the original but although there’s quite a few new features and a couple of new factions, the gameplay feels pretty much the same. The AI could have done with tweaking after the original but it seems unchanged, some of the frustrations still remain when moving units around and you still need to hold the AI’s hand in some situations. For owners of the original, it seems a shame an editor has not been made available free but that’s the price you’ll have to pay. If you’re a real fan of Cossacks and can’t stop playing the game then this is something you’ll probably want to add to your game collection.