Cossacks: European Wars is being hailed the newest innovative RTS to hit the market. Do I agree with that sentiment? Not really. Do I think Cossacks is a good game? Yes, I do. 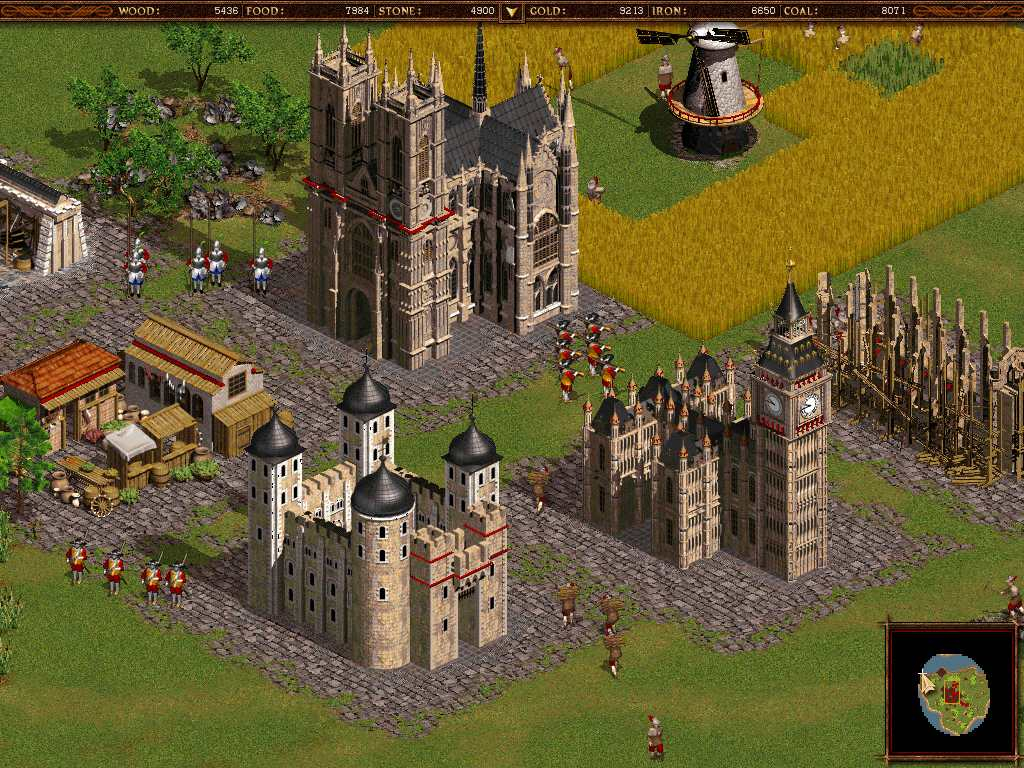 A group of soldiers guard structures from capture.

What Is Cossacks About?

Cossacks is a real-time strategy game set in the 17th and 18th century, the age of Napoleonic war and early gun combat. Several modes of play are available, from campaigns to skirmishes, as well as multiplayer with the ability to play historical missions.

Cossacks is almost identical to Age of Empires II in terms of gameplay as it follows a general resource-harvesting model with mines, farms, woodcutting and so on. Unlike AoE2, peasantry and soldiery alike consume the food harvested, so it is a good idea to keep on top of food production. Storehouses can be constructed near resources to save trips to the town hall, and the mines can be expanded to allow more peasants to mine a resource at once.

As in most RTS games, military units are created from their respective buildings — cavalry from a stable, infantry from a barracks, artillery from a depot. A new addition is the commander and drummer unit, which allow infantry to form up as a squad and act in tandem. This is a double-edged sword in terms of gameplay, however. Formations in Cossacks may not comprise mixed units, require exact numbers of like infantry to form at all, and are a pain to use with loose, un-formed units. All in all, I liked the more standard approach to formations better. It is less rigid and demanding in terms of micromanagement.

Combat is Cossacks is modified by numerous factors, namely unit types, upgrades, range, terrain modifiers, and formations. A smaller factor is the amount of coal and iron ore you have. Each time your artillery or musket infantry fires, it uses one coal and one iron. Therefore, if you are out, your artillery and musket infantry can’t fire. A hollow square of musketeers will gun down advancing light cavalry if there is range between them, but once the cavalry closes, the musketeers will be shredded to ribbons. Additionally, certain countries are more and less effective with unit types. There are sixteen countries in Cossacks, and each has a particular set of balanced strengths and weaknesses. (1) Wheat fields replenish by themselves. (2) A formation moves with a few loose
musketeers inside.

One thing I both liked and hated about Cossacks was the ability to capture unguarded peasants and buildings by moving soldiers nearby. It is realistic to a degree and engenders more careful play, but at the same time almost guarantees another level of micromanagement. Some will like this, some will hate it.

Naval combat in this game tries to be more strategic, but it falls by the wayside. By having “tank” ships called galleys and longer-ranged battleships, the game tries to bring a more strategic approach to the combat, but it really just fizzles. Again, as in most RTS games, more equals better, and as long as you don’t pit two yachts against one battleship and expect to win, that’s all you need to know.

What I really disliked

There were very few elements of Cossacks I simply loathed. One of those elements was the campaign scripting. All of it. I applaud the effort to make the missions seem more story-oriented, but it only succeeded in frustrating me to no end and being completely unreasonable at times. For example, I was marching a group of Russian musket infantry to a city. A peasant says, “I’ll show you the way,” and leads me to a forest filled with bad guys. I see the bad guys and circle around, hoping to flank them when I realized I couldn’t attack them. I can’t even click on them. So, I move my guys into the clearing and sure enough, the peasant says something about destroying my infantry and the enemy in the forest becomes hostile. My musket infantry get smashed, and it’s game over. That sort of horrid mission scripting where it forces you to play the way the designers want it to go is extremely disappointing, especially with such an obvious ambush.

The other element was the amount of micromanagement needed to win. In order to defeat an enemy, you need to station units outside their military buildings and kill enemies as they come out while battering it with artillery. Also, the AI is very weak. It will try to capture your buildings, but when you capture theirs the enemy artillery will destroy it instead of attempting to capture it again.
Graphics And Sound
The graphics in Cossacks are very good. It still reminds me of Age of Empires II, but a lot sharper with an engine upgrade. The architecture of buildings is different between sides, which is a nice touch. The terrain and maps are well done, as are unit artwork and animations.
The sounds are about what you’d expect. Gunfire, explosions, creaking artillery, horses… it’s all there. There’s really not a lot to say about it. (1) A naval barrage reduces this shipyard to splinters. (2) Infantry slaughter enemies as they are conscripted.
Multiplayer Options
Cossacks will support deathmatch/team-play over IPX and TCP/IP over LAN or Internet, including Gamespy Arcade! It also supports, what is called an “historical battle mode;” a type of play where players take the role of famous commanders and fight out historical battles. Cossacks includes a historical database of units,
battles, and campaigns during the Age of Reason.
Should I Buy This Game?
Cossacks is an excellent example of what an RTS should be, and a good playing experience overall. It’s also almost exactly like Age of Empires II with a facelift and a few new perks. It fails to really innovate in any area; instead offering a few new perks and a few things that’ll have you saying, “That’s kind of cool!” That should not be a reason NOT to get the game, though. This is a good RTS game and should see a lot of play.
By – Tim “Juan Golbez” McConnaughy