With Cossacks, CDV is launching a real-time strategy game of a special kind on the market. This is the first work of the Ukrainian developer team GSC Gameworld. Cossacks takes place in 17th and 18th century Europe; at a time of musketeers and dragoons, cannons and kingdoms. You can find out in our test whether the Cossacks teach fear of the genre competition!
Gameplay
In addition to the usual warfare, Cossacks includes successful resource management. In addition to a large number of military units and buildings, civil and economic facilities are also available. At first glance the impression may arise that someone wanted to create a new “Age of Kingdoms” because the gameplay is identical: creating workers, build up buildings, produce resources, selling resources on the market, researching technologies, advance into a new age, build a strong army and send them to the enemy and the eternal hunting grounds. A second look reveals more: If the armed forces of previous real-time strategy games were more reminiscent of marauding gangs, Cossacks sets new standards: Up to 8000 (!) units can romp around on the screen. Other innovations also distance the game from similar-looking competing products. 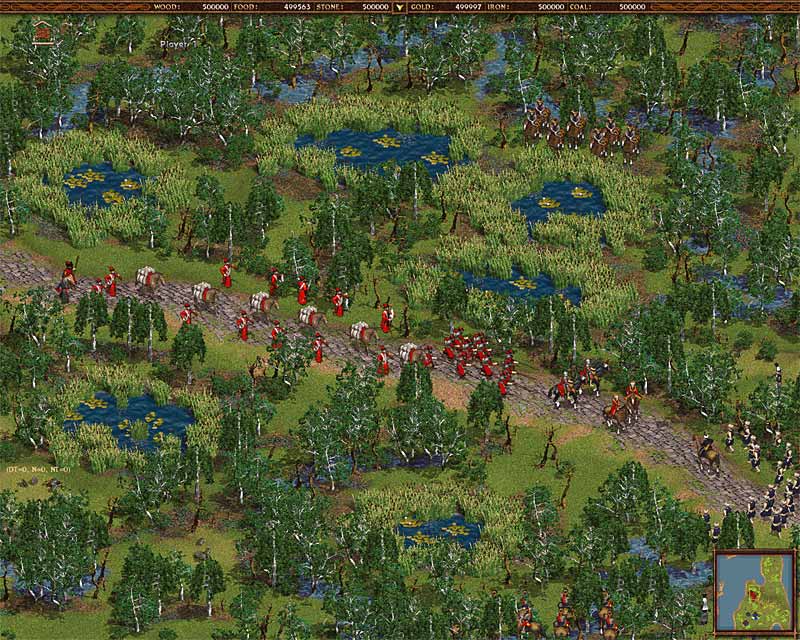 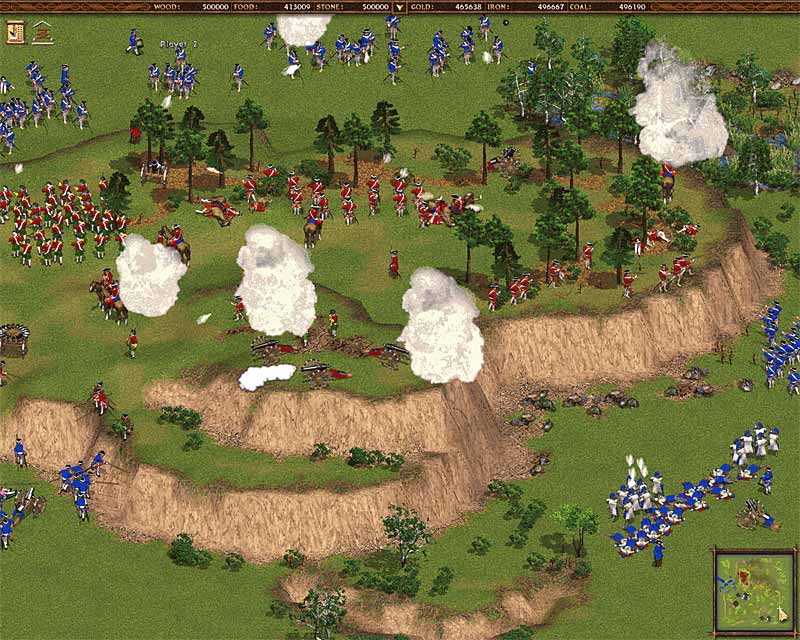 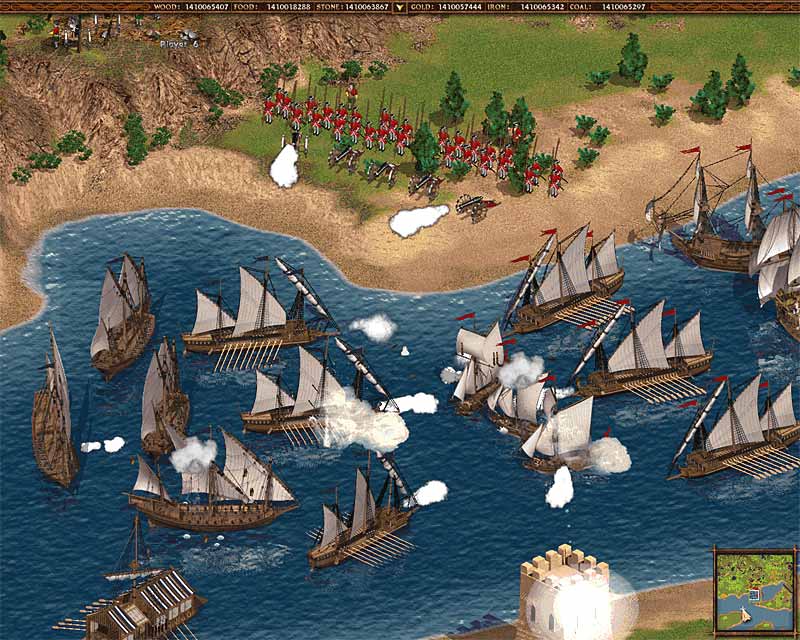 The novice has an extensive and well-explained tutorial to familiarize himself with the game features. The experienced real-time strategist is likely to go straight into one of the four tricky campaigns based on historical background. As an Englishman you fight Dutch pirates in the Caribbean; Ukraine is trying to free itself from the Polish yoke of oppression, while the Russians and French are working to ascend to great power. There are also ten individual missions – also based on historical events. If all of this borders too much on education, you can also play random maps with variable terrain and resource parameters and up to six computer opponents (there are no allies).
You can choose from 16 nations: Algeria, Austria, England, France, Netherlands, Piedmont, Poland, Portugal, Prussia, Russia, Saxony, Spain, Sweden, Turkey, Ukraine and Venice. Each of these nations has its own architecture (!). Although the national technology trees have a general framework, they differ in various possible or impossible developments. Some nations are e.g. unable to advance to the 18th century (including Ukraine).
The general consumption of resources is not generally new (see ANNO back then), but has so far been neglected in this area of RTS (Real-Time Strategy). Initially, the range of resources consisting of wood, food, stones and gold was expanded to include iron and coal. Your units not only cost resources to create, they also want to be continuously supplied with food. A well-functioning economy is therefore incessant, especially since military units with firearms (musketeers, grenadiers, cannons) consume iron and coal with every shot. 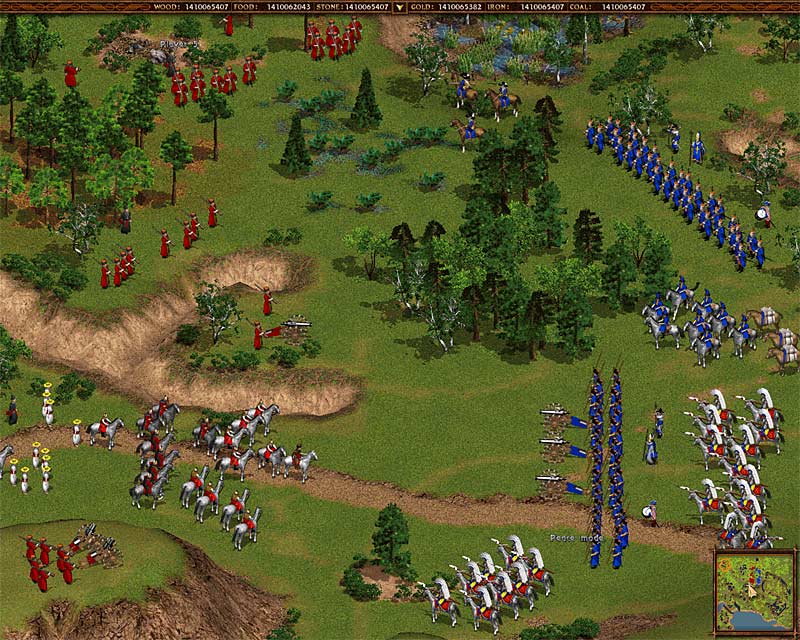 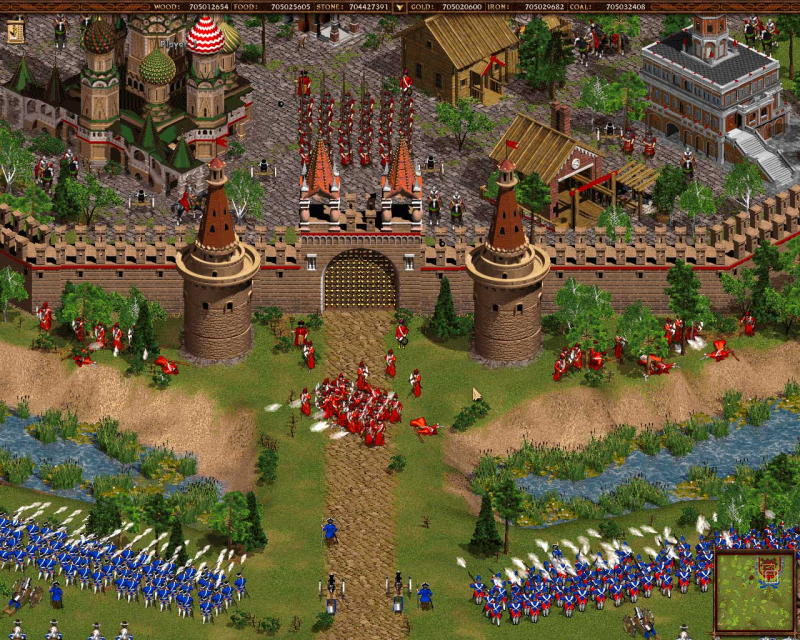 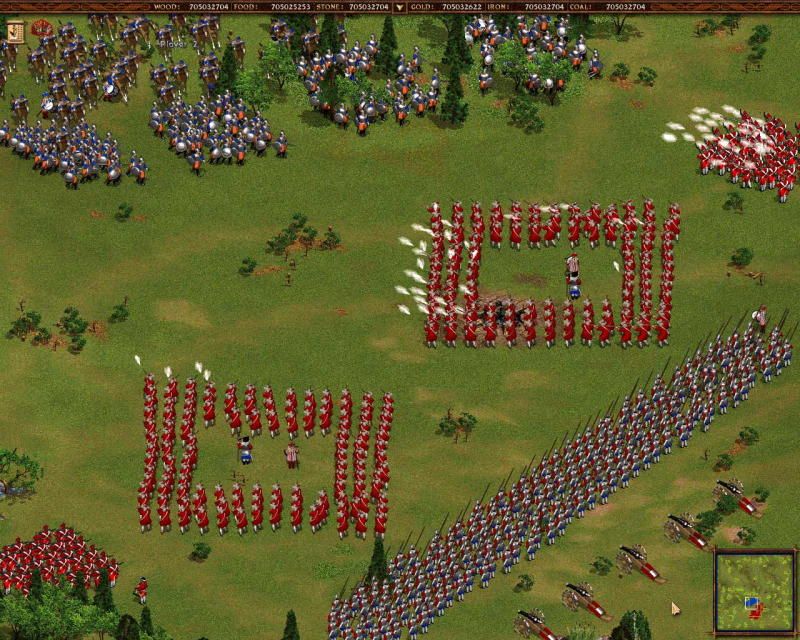 The construction of a diplomacy center has the advantage of hiring mercenary troops. Unlike regular troops, these mercenaries have the advantage of being “produced” very quickly and being ready for action. But they also want to see money for that. So if you have built up a large mercenary army and your gold production is too low, the mercenaries will no longer be paid, then they are mutinied. Nothing is more painful than a formerly allied Cossack squadron that cheerfully mixes up or even conquers its own guns.
Also, too, Cossacks breaks new ground: there is no avoiding having military units guarding all civilian facilities, be it workers or buildings – unless you are building a palisade or stone wall. The same applies to cannons: You set up your own military unit in the immediate vicinity of the opposing workers / the building / the cannons; these change sides by accepting your color. However, no enemy military units may be nearby. This can severely disrupt the opponent’s production, since you not only bag a gold mine, but also the people working in it.
Six resources are available: To be able to chop wood and stones, you need a storehouse (worker) or a town hall, food can be obtained by building a mill and creating grain fields (farmers). Iron, coal and gold are mined in mines that are placed directly on the respective deposits. To begin mining, workers must be directed to the mine. However, work in the mines is limited; in the first stage, only five miners can work per mine; in later stages this can be up to 90 (!) people. However, these expansion stages are very expensive and have to be carried out individually for each mine. Further civil developments to increase production (food, wood, stones) can be carried out in the smithy and the academy. For the rest, the resources are inexhaustible; with the exception of grain fields, which have to be sown again after consumption.
The military component of the game does not offer any great innovations, but some interesting ones can be used to recruit mercenaries, raise your own troops, build defense systems, conduct military research (and maneuvers), etc. What is new is the possibility of training officers and drummers. These have a positive influence on the morale, attack and defense strength of the troops and make orderly formations such as line, column or square possible. The difficulty: On the one hand, the computer opponent is (of course) always outnumbered and sometimes only defeated on the third restart, on the other hand you can literally execute enemy formations without having to expect their defense or flight. After the 18th century, more technologies and new troops became available. However, a new barracks must first be built to recruit the very effective grenadiers of that time. There are no other “ages”. 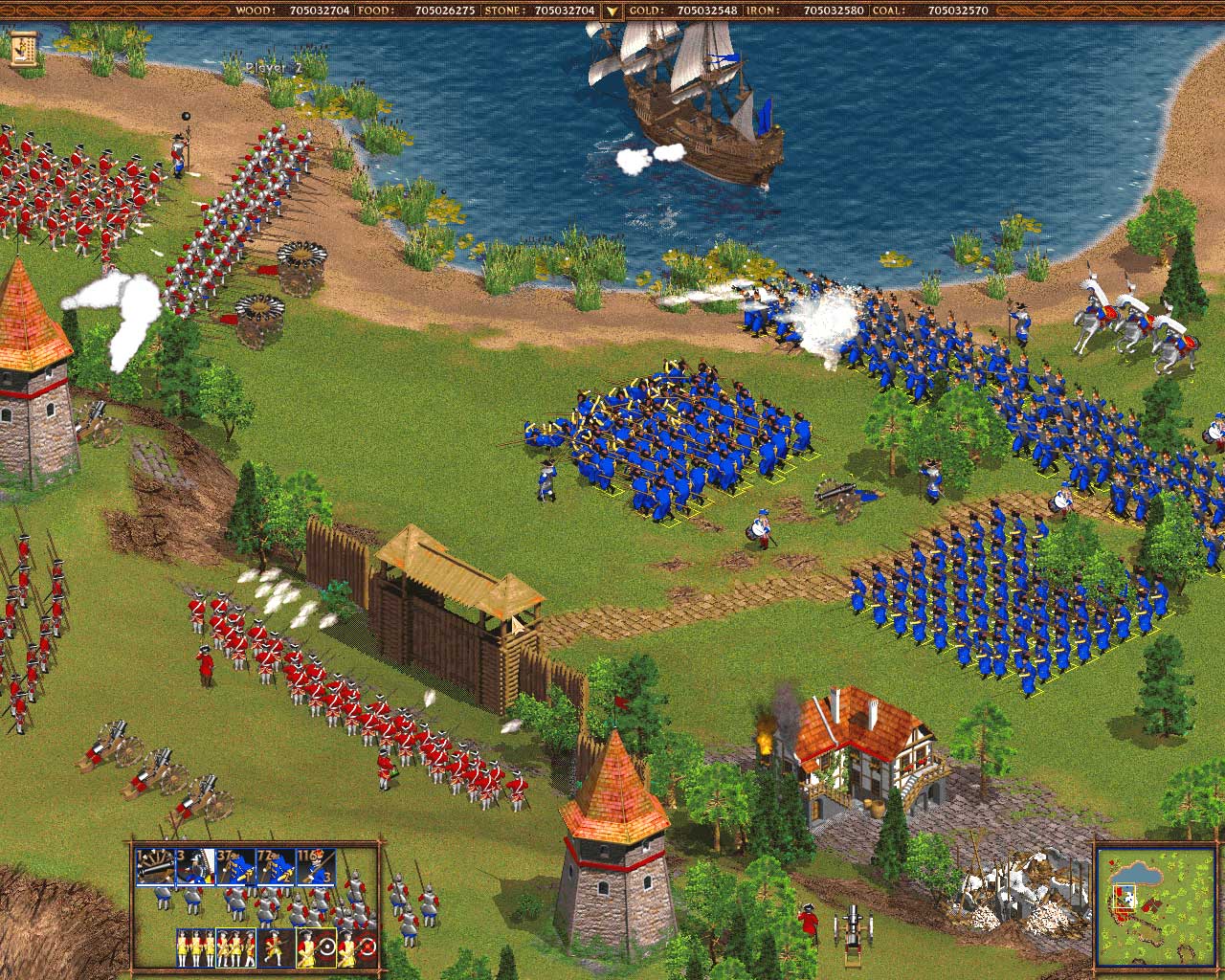 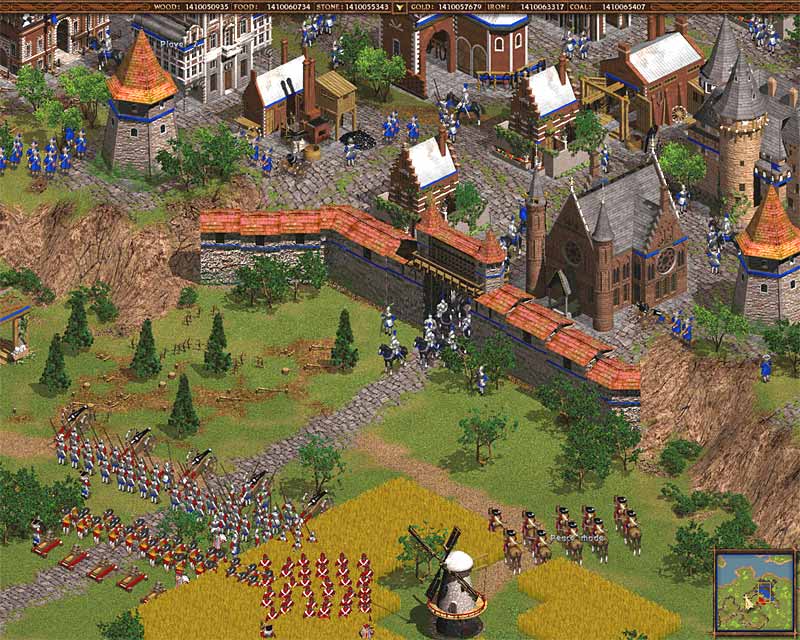 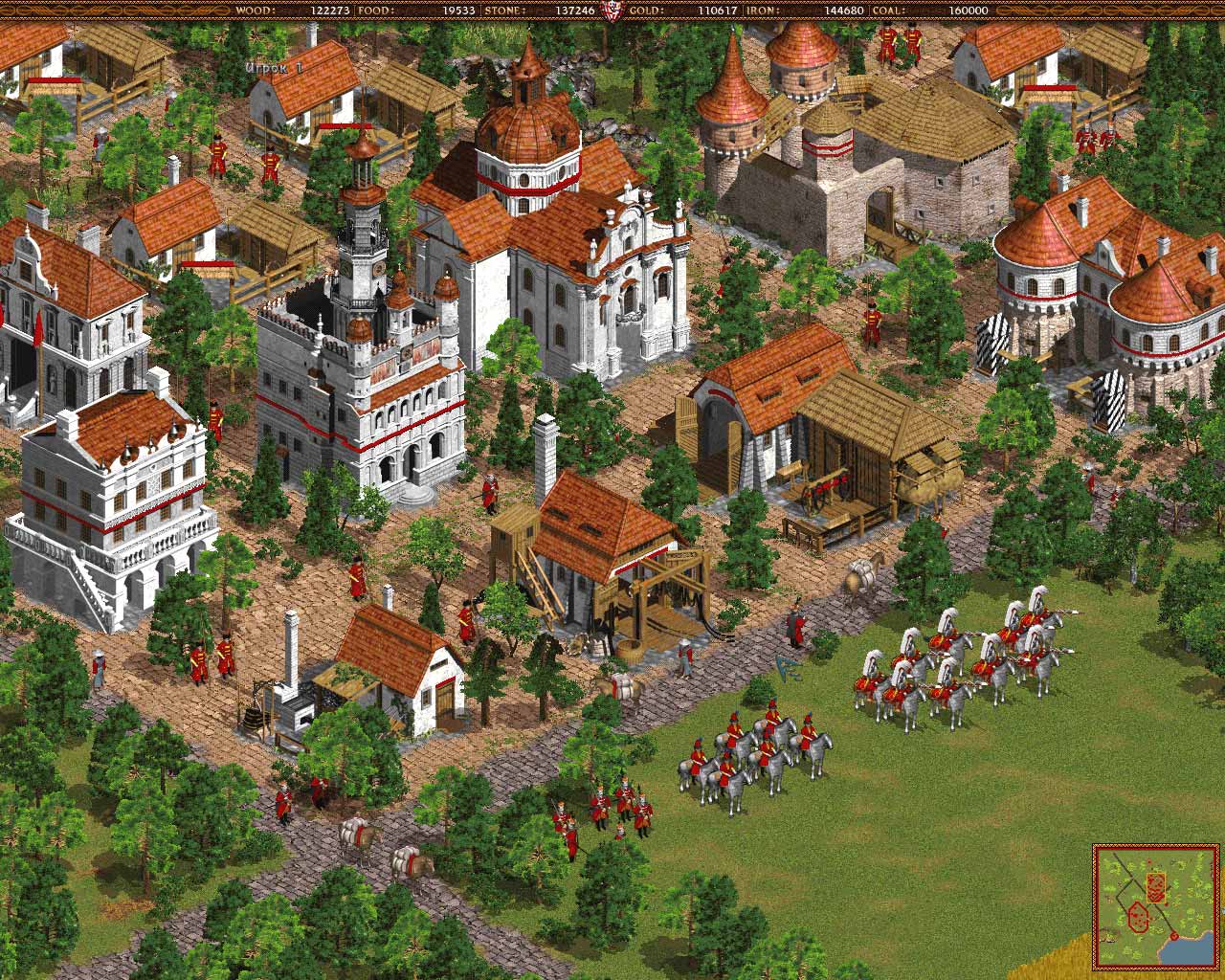 GSC has tried very hard to be more realistic: buildings can only be destroyed by firearms (artillery, grenadiers, archers). The lonely swordsman, who painstakingly tears down a fortified city wall, is just as much a thing of the past as the hand cannon firing through the walls. A wall is not just an obstacle to the path. However, mortars and howitzers have an arc-shaped firing path and shoot over the obstacle. The cheaper palisades are different; you can shoot through these wooden fences, and pikemen are also able to tear them down. The landscape also sometimes presents itself as an obstacle. Although the pixelmans can (finally) cross forest, there are ridges and mountains that are insurmountable. For better route planning, you can display these places by pressing [Q] on the main screen. Differences in height also have a tactical effect: Units positioned “up” see and shoot further. Except for mortars and howitzers, no unit can shoot over a hill.
The interface and the control of the units correspond to the genre standard. Mass production and grouping of units into groups, marking waypoints and attacking are based on the usual key combinations (ctrl; shift). The few additional options are explained in more detail in the very detailed and therefore very good manual. The possibility to play on the internet was also planned (GameSpy), but a patch seems to be necessary for this.
Graphics/Sound
According to the CDV / GSC, the graphics are 3D. However, you do not need a 3D graphics card. However, no zoom levels or perspective changes are available, so that with a resolution of 1024 * 768 on a 15 “he does not see too large a map section. The game graphics otherwise (like the intro) leave a consistently good impression, albeit the animations of the individual figures… There are many types of units of different designs: Turkish farmers wear different work clothes than their English counterparts, the Polish pikeman has a different uniform than the Prussian etc. Cavalry units move, despite galloping, as if they were traveling on rails However, these defects are not so noticeable in large formations. In contrast, all buildings are very nice to look at. Grenade explosions do not leave any damage in the environment, but hits on houses or ships cause smoke and pieces of debris to stir up. There is sound not much to say: the pixel men were apparently born where silent and explosions and shots don’t stand out from the average of other games. However, the music is a feast for the ears, not only contemporary, but also good.
Verdict
The game captivates with its immense depth (continuous use of resoruces, many technologies) and an unusually large variety of different architectural models for the individual nations. The graphics may not be all the rage, but they are still good. The animations are worth revising, as is the sound, but the overall impression and last but not least the fun are right.
Another AI would be desirable in the campaigns, especially an adjustable level of difficulty for newcomers. The fact that you cannot yet play on the Internet is an extremely embarrassing mistake that CDV / GSC made here. If at least the last two criticisms mentioned are eliminated, Cossacks is a “must have game” for every Age and Anno fan.