Publisher: CDV
Developer: GSC Game World
Version: Demo
Expected release: 01/12/00
The following preview, based on pre-release material, is archived on the site as “bonus” reading material, however, some information contained in the article may be obsolete. Our full review of the now released final product can be found in our review archives.
Given the phenomenal success of the Age of Empires series, it’s perhaps surprising that while there’s no shortage of RTS games, there’s very few that have copied the distinct style of Ensemble’s masterpiece. One such game in the pipeline is Stainless Steel Studio’s Empire Earth, very similar in look at feel to AoE, but spanning time from a few thousand years B.C. right up to modern tank warfare (and possibly beyond). Another less well-known game with AoE-like appearance is CDV’s European Wars: Cossacks. With just a quick glance at the thumbnail images in this preview you could believe you were looking at screens from a new AoE 2 mission pack, but these rather pretty scenes from the 16th-18th Century are all the work of previously unknown developer GSC Game World.
While the visuals have a lot in common – lavishly drawn buildings and smoothly animated infantry and cavalry – there is a shift in focus in Cossacks, and that’s on the number of units that can fight. Whereas AoE is geared up for 50-100 troops mustering on each side, Cossacks promises huge encounters with up to 8,000 combatants. The demo I played only allowed battles between Spanish forces on a random map, but the full game will have 16 nations, 80 distinct types of fighting units and a variety of scenarios, campaigns and set-piece battles for players to grapple with.
The quality of the graphics is generally very high, with screen resolutions from 800×600 up to 1600×1024 offered. As with AoE, you can watch buildings slowly being erected, and peasants hard at work gathering resources. The basic premise of the game is typical RTS fare; gather resources, stick up some buildings and churn out your battle fodder. There’s food, wood and stone to be gathered from farms and the naturally forested and rocky terrain (you can tune the terrain with the random map settings), while iron, coal and gold can be extracted by building mines on the desposits that can be found scattered around the map. The basic structures are the expected mills, barracks, blacksmiths and warehouses. Advanced structures such as the marketplace and diplomacy centre open up additional options for obtaining resources and negotiating with other sides in the game. 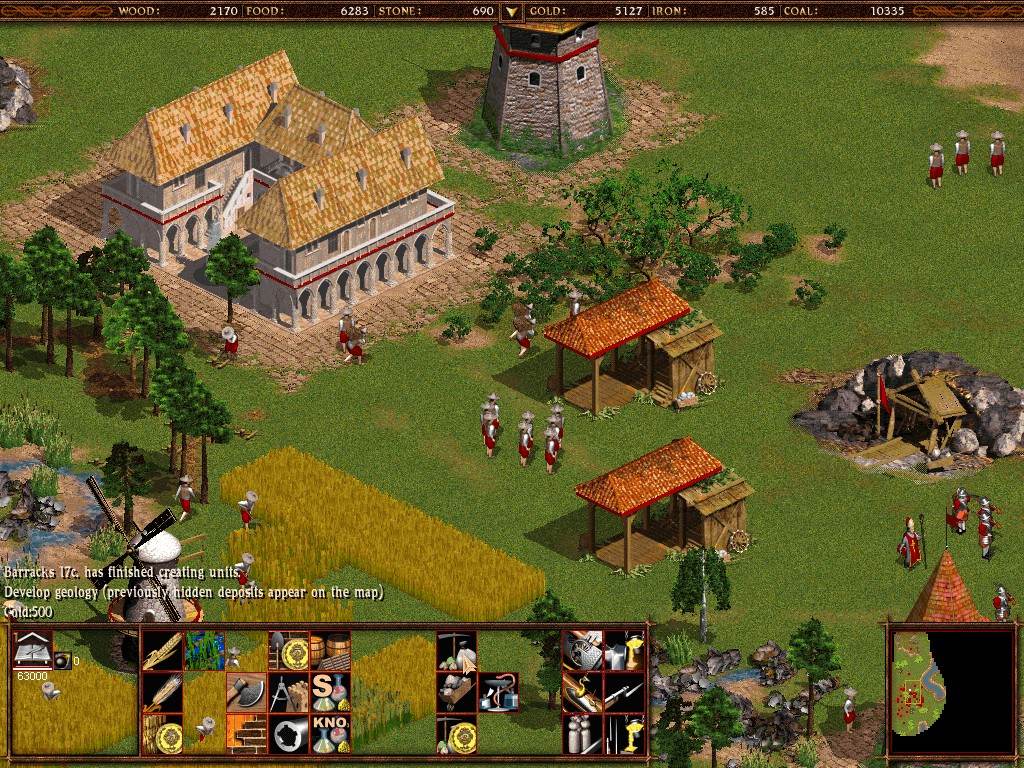 Unlike AoE there are no Ages to progress through; instead new technology all comes from buying upgrades at the appropriate structure, the academy probably being the biggest source of such upgrades. For example, by researching geology you can discover new resource deposits, by researching medicine your troops will heal when resting. Research costs resources, though often in rather non-intuitive ways, e.g. to raise your workers’ salary to make them more productive costs you a large amount of coal. As you might expect, the game does become something of a technology race (there are said to be 300 technologies in the game, across the 16 nations), and thus it’s interesting to see the AI’s choice of tech purchases shown on the “timeline” chart at the end of each scenario.
The focus of Cossacks lies on the military side, to the extent that the full game will offer some historically-based scenarios with very large armies on each side. Of course, playing in a game where you start off with nothing, control of the map’s resources is critical. Basic units such as pikemen can be produced very quickly, while musketeers, cavalry and artillery take rather longer, as well as costing more in resources. While it is tempting to pay to research military (and economic) improvements, it’s also very quick and easy to roll out a 200-strong pikeman army. This suggests that “rush” tactics might overwhelm an opponent who starts out with more peasants than troops, but peasants do seem to be able to fight, and defensive towers also seem relatively strong.
To fight more effectively, troops need a leader and a drummer to create a formation. Once made, the formation can be moved as a single unit, with its facing controlled by the Myth “gesture-click” method (thank heavens Microsoft didn’t “invent” and patent that…). Groups with leaders can adopt line, column or square formation, and seem to be able to hold that formation well while moving. Once combat is joined, fights tend to devolve into disorganised chaos, but if you have your leader and drummer nearby you’ll still get some combat bonuses. Troops have morale; they’ll flee if they don’t like the odds, and they’ll also charge if they get confident and an enemy gets too close. One weakness of the current version is that when a number of formations join battle, it becomes tricky to select and command them (fans of the Warhammer RTS games will know the feeling); it would be good to see menu bars to allow formations to be selected via icons as well as clicking on troops on the battlefield.

Additional images of the original preview (unfortunately they were only archived in a small size)
Artillery plays an important part, as it should. Cannon ranges are long, typically much more than one screen width, though not quite Big Bertha in magnitude. This makes town structures and remote mines vulnerable to hit and run artillery raids (one of the few weak graphics is the rather modern-looking mortar unit). However, infantry can capture enemy artillery (and buildings), so if you don’t protect your big guns they can quite readily be turned against you.
It’ll be interesting to see how Cossacks fares when released later this year. The broad similarity to AoE won’t do it any harm, particularly given the visual similarities. However it should also do well given the scope and scale of the combat. Large set-pieces, and random map skirmishes featuring troops who obey the whims of the included morale system may appeal to the type of audience that lapped up Shogun, even without the presence of flashy 3D graphics. But don’t expect a thoroughly accurate historic simulation – CDV is also producing the visually rich but quite C&C; in style Sudden Strike. Both should fare a lot better with English-speaking audiences than the more well-known German gaming exports.