When Cossacks: European Wars was released last year, many reviewers — including myself — compared it to Age of Empires and noted that in many ways it continued where Age of Empires II: The Age of Kings ended. And, with Bruce Shelley and team still focusing on Age of Mythology, Cossacks looks like it will have to suffice for a little while longer. Now, almost in keeping with Ensemble Studio’s past efforts to tweak their AoE titles with an expansion, the developers at GSC Game World have released a similar-styled add-on titled Cossacks: The Art of War.

In many ways it helps make a good game like Cossacks even better, but unfortunately it also only really adds a few elements that were missing in the original game and should have been there in the first place. Most notable are the improvements in multiplayer gaming. Now it is finally possible for multiple human players to take on the computer instead of merely dueling it out in deathmatch. More importantly, as with AoE, you can also give yourself a couple of computer allies while fighting it out with other human or computer powers. As you can set the difficulty level for each power you can make your allies all the more effective or ineffective as you see fit.

This difficulty rating can also be set when playing the game’s campaign missions making it a lot easier for newer players to give them a try. Additionally, the random map features have been greatly polished so that you can choose what types of forces to begin with, in addition to merely choosing the terrain type and resources. Now you’ll have the chance to pick whether you just want to begin with the typical peasants or actually have an army and cannons with you. There are new in-game options like the ability to turn off the automatic capture feature, so you don’t have to worry about a single cavalry raid converting most of your peasants — but of course if you relied on this strategy you’ll be out of luck as well. 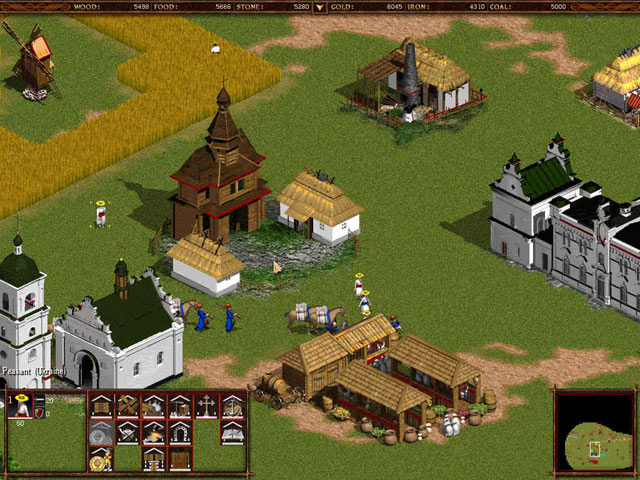 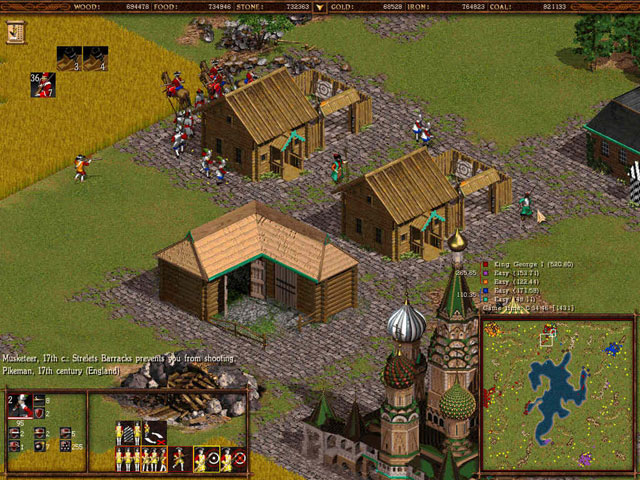 The developers have also taken note that the era of Cossacks, the 17th and 18th Centuries, was an era of great political intrigue and ever-changing alliances where the great powers of Europe were forever making war and peace. This aspect is recreated in the multiplayer option that is called “peacetime,” where the player hosting the session can select a pre-determined time period to allow everyone to build up their towns and get an actual economy going before the beginning of hostilities. No attacks can occur and anyone waging war during peacetime will see their forces destroyed. This, of course, means that those who strive for early (and sometimes crippling) raids against their opponents will have to rethink their tactics, but it is a much-needed improvement for a genre that demands something remotely different.

The other improvements brought to Cossacks with Art of War are the typical add-on elements like more campaigns, units, and new powers to play. The addition of campaigns and battles set during the reign of King Federick of Prussia as well as the English Civil War will certainly appeal to fans of those eras, but the game’s developers could have probably provided a bit more. The new powers of Bavaria and Denmark are not exactly major movers in the grand historical scheme of things, and this is apparent as neither is featured in any important role in the game’s new missions. Fans of this historical age of professional soldiers are left without the great struggles and important battles like the Turkish siege of Vienna, and once again Venice is just a historical footnote as this expansion fails to address the great naval conflicts between Turkey and Venice.

However, to contrast this, players are treated to a number of new naval units, with even more improvement options. Players can therefore use random maps with numerous islands to recreate the multitude of wars that were fought in the New World colonies in the Caribbean. About the only thing missing are the all-important trade routes to the Europe.

To reduce the power that artillery brought to the game, and even unbalanced it in many situations, artillery depots can now only build and support five cannons at a time. You will therefore have to build even more artillery depots if you desire to have a large contingent in your arsenal. This helps recreate how important even a few cannons were in this day and age of muskets and swords.

Formations have been equally refined, and this adds to one of the game’s strongest features. Nothing is more impressive than building up a sizeable force of men and horses and preparing to invade the enemy territory. Units in formation will act and respond as an individual and you can still use the right mouse button to control facing of your troops. Cavalry can be loosely grouped, but the game still could use an actual cavalry officer. Individual units or formations can be set to patrol and guard, and this helps protect the frontier from sudden surprises. 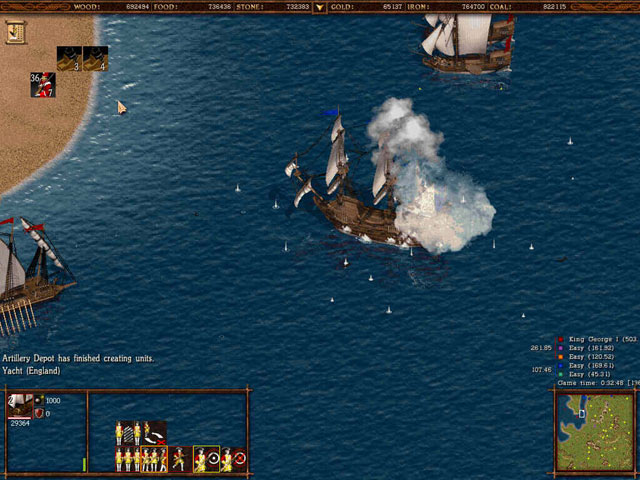 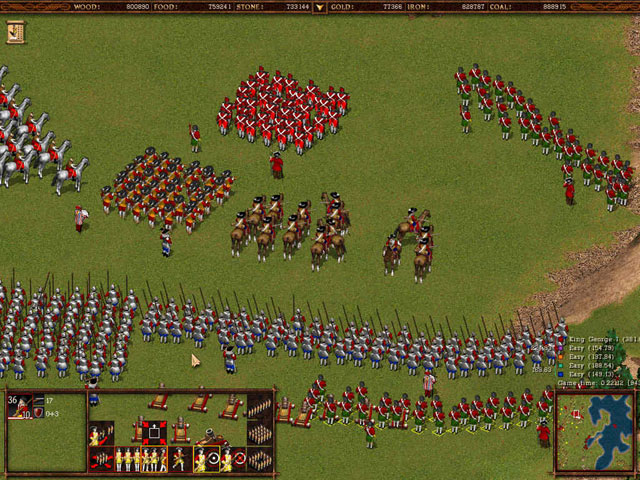 The battle animations also could use some more work. Once again a cannon salvo will essentially knock down a column of men with hardly anything to animate the carnage. The explosions, building destruction, and naval combat are still very impressive and it is a welcome change to see that this destruction can affect those immediately in the vicinity.

Women are still strangely absent, and it seems that female peasants aren’t required to toil in the fields, but hopefully the developers will address this if they do a follow up game or further expansions. The final notable item missing from the random maps is a higher-level commander, like a general. It would be truly great to be able to control and command a series of formations as a group — something that is done in actual wars. But we can’t have everything and actually what we have is pretty good.

The Lowdown: Cossacks: The Art of War is a welcome expansion for a game that really shouldn’t be overlooked.
Pros: Improved multiplayer; more campaigns and scenarios options along with additional countries to play.
Cons: Game still lacks that “something” truly unique to make it a classic; some combat animation issues.