The War for Ukrainian Independence? The War for Spanish Succession? Xebecs? Spakhs? No, this isn’t some painful pop quiz on European history; it’s just some of the campaigns and units you’ll find in last year’s Cossacks: European Wars. A real-time strategy game, Cossacks let you play out enormous battles set in Europe during the sixteenth through eighteenth centuries. Created by Ukrainian developer GSC Game World, Cossacks owed much of its look and feel to Ensemble Studios’ superb Age of Empires series, but it wasn’t a simple clone of those games.

Along with its sometimes obscure (yet interesting) subject matter, Cossacks included features that set it apart, like sixteen playable nations, seemingly countless unit types, relatively smart and independent peasant units, and huge armies that dwarfed those in similar RTS games. If that weren’t enough, GSC released an expansion pack earlier this year called Cossacks: The Art of War, making Cossacks better and even bigger through gameplay improvements, more units, and historical battles. Soon you’ll get to play the third release in the series, aptly named Cossacks: Back to War. Back to War looks like it could almost burst at the seams with gameplay options.

If you haven’t played Cossacks yet and want to give it a try, you’re in luck, because Back to War will be a stand-alone expansion that includes everything found in the original game. You’ll get infantry, cavalry, naval, and artillery units from colorful cultures, along with a sprawling technology tree featuring over three hundred different upgrades. You’ll find scores of independent scenarios and multi-mission campaigns taken from the annals of European history. You’ll also find interesting gameplay concepts: you don’t harvest resources merely to create units, but also to maintain them and use them in combat. Artillery and handgun fire will deplete your precious coal and iron reserves, for instance.

Back to War will also include all the material from The Art of War expansion pack. This means you’ll get not only the new units you’d expect from an RTS add-on, but also some seemingly small, but significant, gameplay improvements. For example, The Art of War adds the ability to issue orders while paused, as well as new guard and patrol orders for units.

Of course, Back to War won’t merely be a repackaging of Cossacks and The Art of War. In true Cossacks fashion, you’ll find a lengthy list of additions and changes. Cossacks gave you sixteen playable nations, while The Art of War added Denmark and Bavaria to the mix. Back to War will add Switzerland and Hungary, bringing the grand total of nations to twenty.

These latter two nations will feature twenty new buildings (or at least buildings with new architectural styles) and four new units each, like the Swiss mounted chasseur and Hungarian Pandur cavalryman. Plus, some new units will be added to the existing nations, like a Bedouin camel unit for Algeria and Turkey. And, you won’t merely get a lot of individual unit types, you’ll get to use lots of them at once — and we mean lots of them, with up to eight thousand units heading into battle. 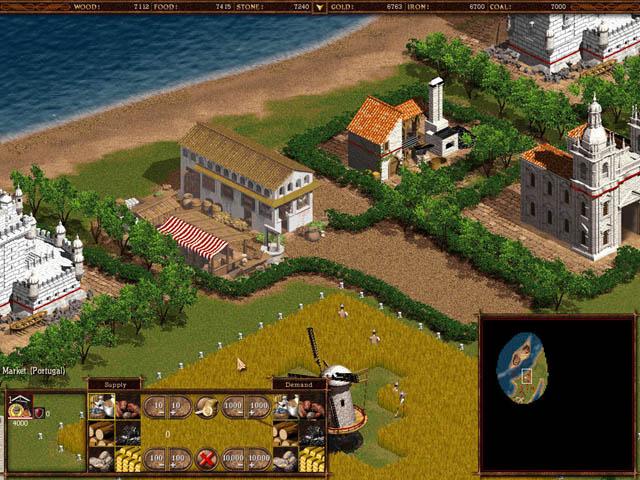 More and more, fans are creating mods and add-ons that rival or surpass retail games. If you can’t always beat them, why not join them? GSC has been supporting the work of a group of diehard fans to add even more unit variety and detail to Cossacks, and they’ve dubbed the results of this work Mod1. Don’t let the boring name fool you, though: this mod, released earlier this year through the Internet and set to ship with Back to War, will offer up a smorgasbord of new units and features. Mod1 boosts the number of unique national units and will include around thirty new ground units, like the Venetian elite musketeer, and three new cannon types, like the coastal defense cannon. The mod also features some gameplay alterations like increased formation sizes, altered build times and attack values for better balance, and changes to the way artillery is handled.

Along with all the nationalities and units, Back to War will include seemingly countless battles to be fought. The single-player game will offer one hundred different missions, (each playable on four difficulty levels) featuring just about every combination of terrain and faction you could want. You’ll also get a number of campaigns, including a detailed tutorial. Then there’s a random map generator, which will let you setup games to your liking, choosing AI difficulty levels, terrain type, initial resources, map size, and much more. On top of that, the game will include a sophisticated mission editor with a relatively intuitive point-and-click interface.

When you’re ready to test your generalship against other humans, you can use a random map generator for online play or choose battles from various historical wars. Our preview copy included battles from eight different wars, including the Dutch War of Independence, the English Civil War, and the Seven Years’ War. GSC will also be adding some new multiplayer capabilities with Back to War, like the new VIZOR feature that will let you watch other players compete live. GSC also promises a new “Automated Championship System” for promoting competitive online events, though details are sketchy at this time.

As for Back to War’s presentation, you can expect pretty much what you’ve seen in the original game and first add-on: simple, but pleasant, and effective graphics. More than anything, the interface and unit visuals should remind you of Age of Empires II, albeit not quite reaching the same level of artistry in Ensemble’s hit. Still, you’ll see plenty of color, with hundreds or even thousands of brightly uniformed units marching, charging on horseback, or firing muskets. As ever, the buildings will sport meticulously detailed architecture with diverse national styles.

While Cossacks: Back to War likely won’t break any major new ground for the series (or RTS games in general), it should certainly take Cossacks’ popular formula and refine it while adding even more units and features to and already big game. If you enjoy traditional harvest-build-conquer RTS gameplay and European history, Cossacks: Back to War looks like it should offer you loads of challenging RTS battles on a truly grand scale.

Interview from The Wargamer