I’m pondering a new rule for computer games. How does this sound? If an expansion pack comes out less than a year after the original game was released, don’t buy it. I’m sure there’s a counter-example out there somewhere, but I can’t think of one now, and the rule covers most Heroes of Might & Magic expansion packs accurately, so it seems reasonable so far. And it’s relevant here because American Conquest: Fight Back was released a mere seven months after American Conquest, and it’s not worth buying.

That’s not to say Fight Back is a terrible game. It’s just that, as a stand-alone expansion pack to American Conquest, its new content is a little underwhelming. According to the game’s web site, there are five new nations (including Germany, Russia, and the Alaska natives), 50 new units, 26 new missions in eight “thrilling” campaigns, and a new battlefield mode for people who don’t want to mess with bases and economics. The reason I had to refer to the web site is because most of those changes are difficult to detect, and if you install Fight Back you might think somebody messed up and gave you another copy of American Conquest.

Consider the additions that should have had the greatest impact: the new nations and units. The problem with them is that American Conquest is a game in the same mold as Age of Empires II. That is, there are a bunch of playable factions, but there isn’t a great deal of difference between them. Really, the American Conquest factions only differed between the European nations (who could play defensively) and the American natives (who had to play offensively). The Fight Back nations don’t add a third way of playing. As far as I can tell, those nations and their “new” units are simple re-paintings of existing units, and they don’t add anything to gameplay.

Worse, developer GSC Game World didn’t even tweak or balance the existing units. And so all the problems from American Conquest — like forts and fortresses happily blowing up friendly buildings, and canoes taking out any number of infantry units (not to mention doing a fair job against caravels) — are still there in Fight Back. If the engine changed at all, I didn’t see it, and I even went back and played a little American Conquest to see if I could tell the difference. 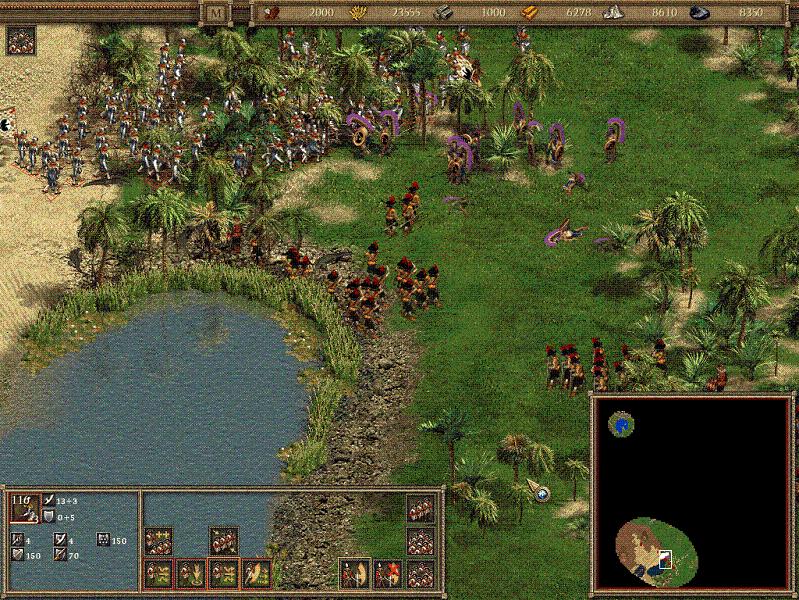 That means the only two real reasons to buy Fight Back are the eight new campaigns and the battlefield mode. Let me start with the campaigns. There isn’t anything wrong with them; it’s just they’re not very exciting. The campaigns cover things like Cortez and the Aztecs, Pontiac’s rebellion, and Russia’s attempt to conquer Alaska, but that’s a far cry from, oh, the American Revolution. And once again GSC lets you play both sides of conflicts, but that just means the 26 new missions take place on about 15 new maps, and playing most maps twice is a little boring.

Luckily, the final addition in the expansion pack, battlefield mode, is sort of fun. It’s a mode for people with ADD. You select one of ten battles, take 20 seconds to possibly buy upgrades for your units, and then start fighting. You don’t have to worry about bases or resources at all. It’s just a single battle, and the game keeps track of your score (evaluating things like the difficulty and how well you managed your units), and so you can play battles multiple times to perfect your strategy. Battlefield mode is also a decent primer for playing the campaigns (and multiplayer). If you just tell your units to attack the enemy, you’ll get beaten badly, and so you have to be careful about when you let your units fire, and how you position them, and things like that. But even here I’m not sure how worthwhile the mode is. American Conquest came with an editor (Fight Back does too), and I assume you could use it to create some pitched battles similar to the ones in battlefield mode.