While strategy is to be commended here, the incredibly dated engine and the beyond boring interface would be enough for any general to surrender before they even begin. There are a lot of troops to the battlefield which is a big factor for the games engine but come on, with more powerful machines now we should be seeing effects to make us drool and not be reminded of the days Windows 98 was King.

The units themselves are well detailed to the time period, but the lack of decent visuals almost completely undoes all that hard work. Watching volleys of musket fire is always a good thing for any General; it almost makes war seem worth it in some twisted way. Death sequences for men though leave a lot to be desired still, simply falling over and disappearing while efficient perhaps, doesn’t make for good smug satisfaction, no sir.

‘Divided Nation’s’ campaign covers the historical conflicts of the American Civil War, the Texas War of Independence and the Battle of New Orleans. GSC certainly has put in their homework for these events, trying to recapture the epic scales and tense struggles.

‘Fight Back’ sees a mix of other nations at the time, all seemingly having something to do with the American continent. Spanish kicking the Maya and Aztec, those crafty Germans searching for El Dorado, some blood spilt between the Indians and the British and of course who could forget the Russians wanting Alaska.

‘Three Centuries of War’, you travel to the New World as Christopher Columbus when this entire ruckus began, setting the pace of battle for the next 300 years. Legends Pizarro and Washington will be major parts in the campaigns.

Historical accuracy is a huge thumbs’ up and great credit must got to GSC for that, no doubt.

The two later additions to the series see some improvements; such as a new (or at least then) “battlefield” Gameplay mode will let you command thousands of troops for some desperate action. When battles blow up to these sizes it can become a burden to control so many men but luckily officers, drummers and standard bearers are there to better organize platoons but also keep morale up. Should it fall, then you’ll see those lines break and if it gets too bad you’ll lose control altogether. Think of a Total War game, as they act in a very similar fashion with regards to the troops.

Base building is here but not in your usual way, instead of having to concentrate on resource gathering, you mainly need to defend your fortifications. While resources are not limitless you’ll have plenty to get the job done, each building (or tent) costs more each time you need another of it. This helps to limit insane levels of unrealistic expansion, so the protection of your workers is paramount.

Units also get formations to use, which are once again very accurate to their time period. Before you undertake each mission you’ll be given a brief history lesson on exactly what it is you’re about to be involved in, you get a better sense of the true ramifications of success or defeat.

‘Fight Back’ seems to have lost its way out of the herd, by including other powers whether large or small, and shifting focus from the US. It seemed pointless as if they had lost a sense of direction or were hoping to hit the European market harder, it felt an odd calculation.

Combined there are 19 campaigns, and for the flaws of the game which are mainly visual esthetics, there are varied and challenging missions to be found. Not all are, building up, defending and then attack missions either. You’ll be given an array of ‘specialized’ objectives as after all I’m sure the real battles and situations themselves weren’t quite as straight forward.

Overall there isn’t a huge amount of improvements from each addition to American Conquest, new campaigns yes, new units yes, but sadly no new enticing features. With the release of this compilation and its recommended retail price (19.99), it’s as if these problems were taken into consideration and so instead of trying to sell them independently, gang them up, thus we have the American Conquest Anthology. Even then it may still be hard with ground breaking new titles such as Company of Heroes in the charts.

For fans of the series and lovers of things historical, that usually involve a lot of bloodshed, you’ll probably want to grab this with both hands and maybe even a foot. For anyone expecting so much more of an exhilarating experience and much better graphics, look else in the land of RTS.

Top Game Moment: Watching hordes of platoons fall like dominoes to the power of the musket. You can never have enough gun powder. 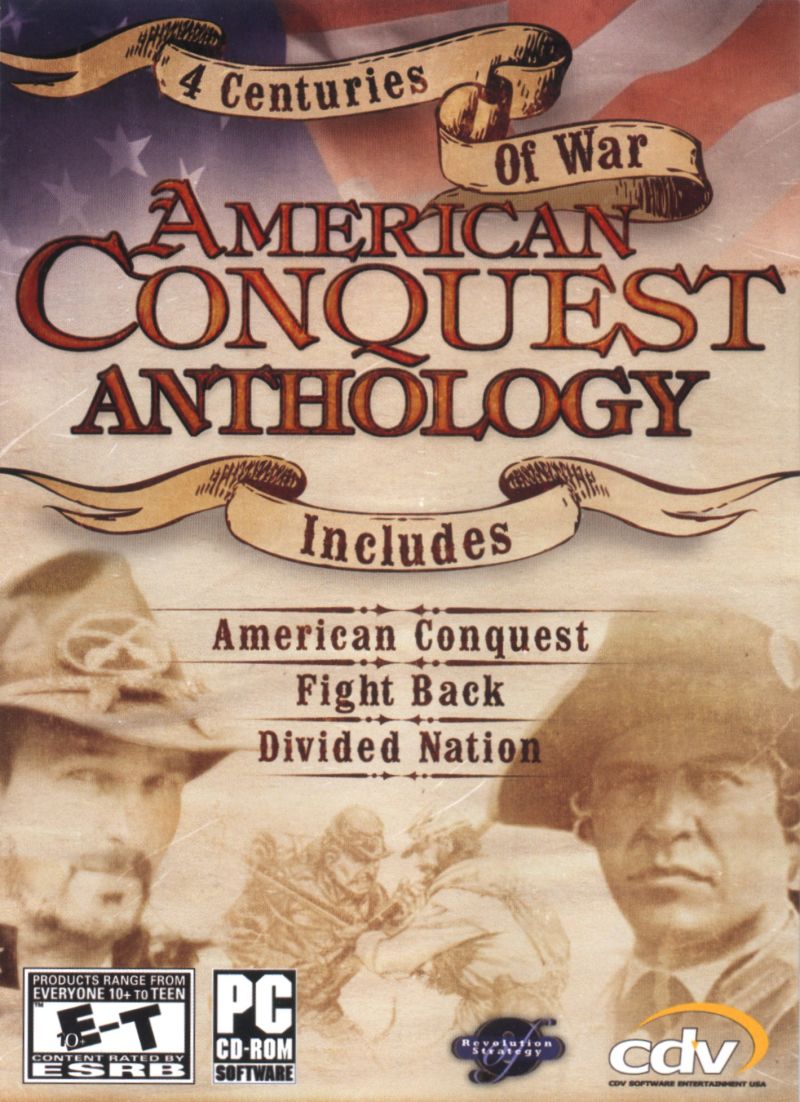