Pre-nineteenth century RTS games have been growing up slowly from two sources: Creative Assembly’s Total War series and CDV’s Cossacks series. Creative Assembly’s progress has been noticeable, but the add-on and sequel to Cossacks: European Wars exhibit only marginal improvements over the first product, sprucing up an interest derivative of the Warcraft paradigm. With American Conquest, CDV is attempting to explore more than one “New World”. The question remains whether the product found a new gaming continent or simply circled the Canary Islands.

American Conquest takes on a topic that has been surprisingly neglected by RTS games: tactical combat during the Age of Discovery in the Americas. Eight campaigns, with linear but unlinked scenarios, cover the period from Columbus’ early attempts at colonization, to Tecumseh’s revolt against early domination by the United States in the early 1800s. Of particular importance are the French and Indian War (also known in Europe as the Seven Years’ War), and a campaign detailing the American Revolution. Several of the campaigns can be played from both sides, and each scenario has a well produced spoken historical prologue, showing a nice progression on the part of GSC Game World. For those who played any of the Cossacks games, rest assured that the campaigns and introductions are much more polished and clear now. The producers obviously invested more time and money in their translation to English as well, to the point that many of the campaign intros can be used confidently as educational tools. A few are a bit on the lengthy side, but they are all well done.

Nine single missions offer stylized representations of actual battles, such as the French attack on Fort Pitt, and random maps provide player-modified challenges. The three major colonial powers, Spain, France and Britain, are represented with seventeenth and eighteenth century units and equipment, with the US showing up appropriately in late eighteenth and early nineteenth century garb and gear. Much more interesting is the inclusion of eight indigenous nations including the Aztecs, the Mayas, and the Iroquois. American Conquest shows their unique units and buildings with interesting depictions of their variety. 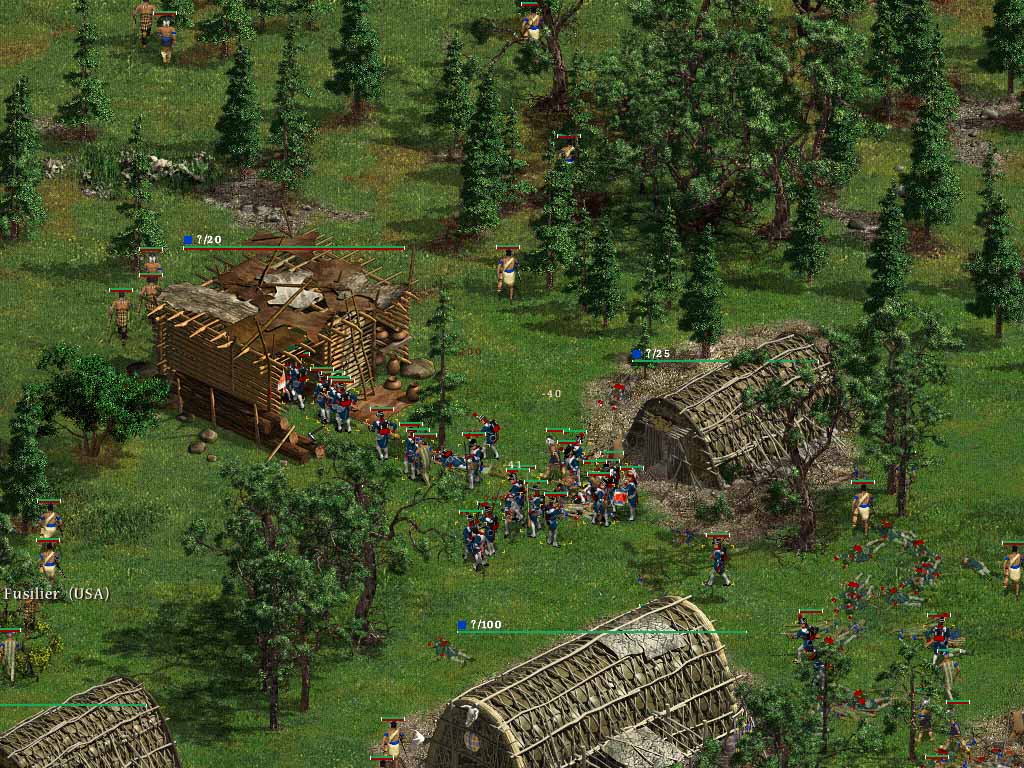 Installation is a snap with the usual install wizard, on-line registration and links to web pages. The 76-page manual covers all the bases, albeit with small print on glossy pages. The readme file provides helpful hints on hotkeys and interface issues. Although no tutorials exist per se, the early scenarios of Columbus’ campaigns introduce players to basic concepts in a tutorial-like fashion. Players unfamiliar with the Cossack system would do well to play these early missions at varied difficulty levels to learn the subtleties of play.

This game’s 3D graphics are outstanding, with magnificent outdoor scenes and great constructions of Mesoamerican temples. Waterfalls have a National Geographic quality and are beautifully fluid. The unit icons are well animated, with the usual health bars and rather irritating floating morale comments (“It’s a slaughterhouse!”) can be toggled off and on. Of particular interest is the animation of cannon crews loading and firing their weapons. Some of the European forts, fortresses, and buildings seem oversized, but after some time playing feel more appropriate. Sound is fine with good music, marching feet, gunshots, crackling fire, and other battle sounds.

The interface is the usual left-click to select and right-click to issue orders, with the cursor changing to indicate the specific task to be performed. Double clicking one unit will select all other units of that type, and groups can be formed with the usual “CTRL+#” protocol. Selecting a unit shows its status, maintenance costs, combat values, action stances, and, in the case of “peasants” (the term “settler” would have been more appropriate), construction opportunities. A selected building shows the products and upgrades available. The cursor tips automatically explain many icons and units, while an on-screen icon continuously reflects the adequacy of housing. 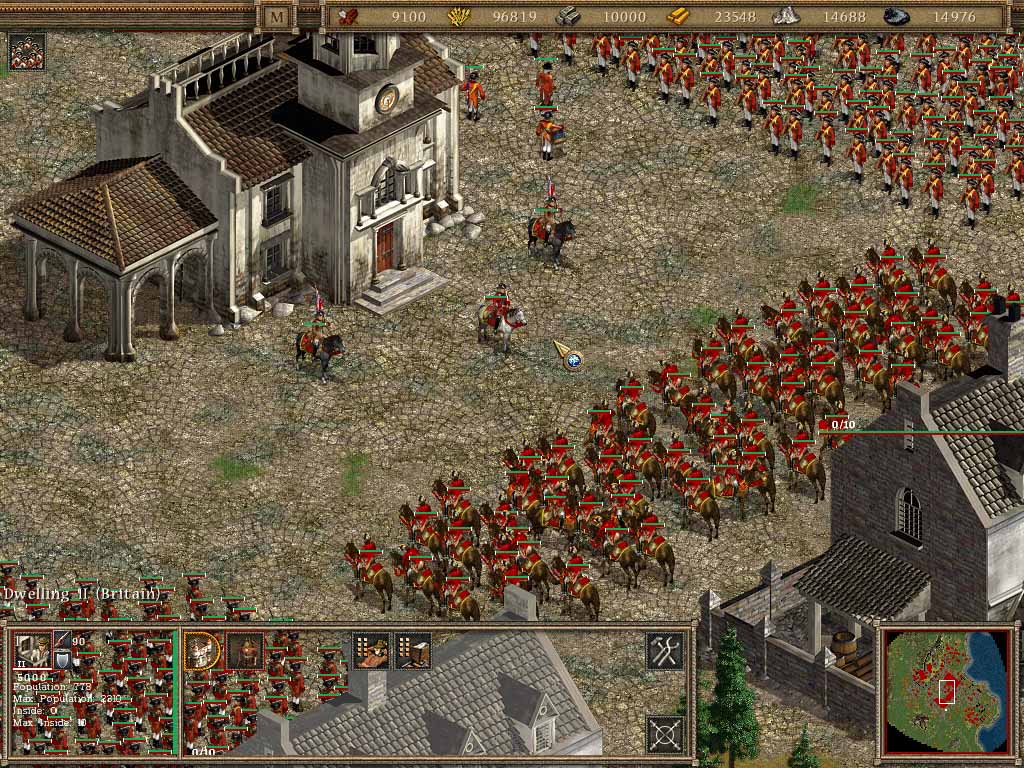 Sensible Changes in Gameplay and Mechanics

Veterans of the Cossacks games will note several rationalizations in play. Although players shuffle peasants around to gain resources and create buildings, these activities are not final goals, but a means to an end, such as establishing settlements. Buildings make more sense in that their abilities are more appropriate to their structures. Housing, not town centers, produce peasants. Forts, fortresses, and training grounds must have a steady stream of peasants to turn into warriors when and if the new “infinite” production feature is used. Military buildings become key establishments with the ability to defend themselves, an ability enhanced when troops are sent in to garrison them. Any building can be turned into a strong point, but only specific structures have automatic defense.

This new use of buildings transforms the face of the gameplay. Players can choose to capture these structures, surviving the defensive fire and massacring any garrison, or destroy them with flame arrows or artillery fire. These missile weapons are given more variability. Depending on range, arrows can either destroy buildings or kill enemy troops. Long-range artillery is used against buildings in designated areas; medium round shots have a splendid ricochet effect on formations, while canister has its usual ghastly results on enemy soldiers. Friendly casualties can be expected from most types of gunfire, with one option among many allowing for firing into a melee containing friendly units.

The mechanics of unit control have also been rationalized a great deal and add to gameplay. Most units have shock and missile combat abilities, e.g. musket and bayonet. Units can be ordered to use one, or the other, or both. Thus, an infantry unit can be ordered to volley and then receive the command to use only hand-to-hand weapons. This allows immediate bayonet charges without waiting for reloads. Stances such as “hold ground” and “disable attack” lets players have formations hold fire until the most fortuitous moment. Formations have been improved by having only a minimum and maximum number of troops for an officer to form up, instead of the arcane series of numbers seen in Cossacks. 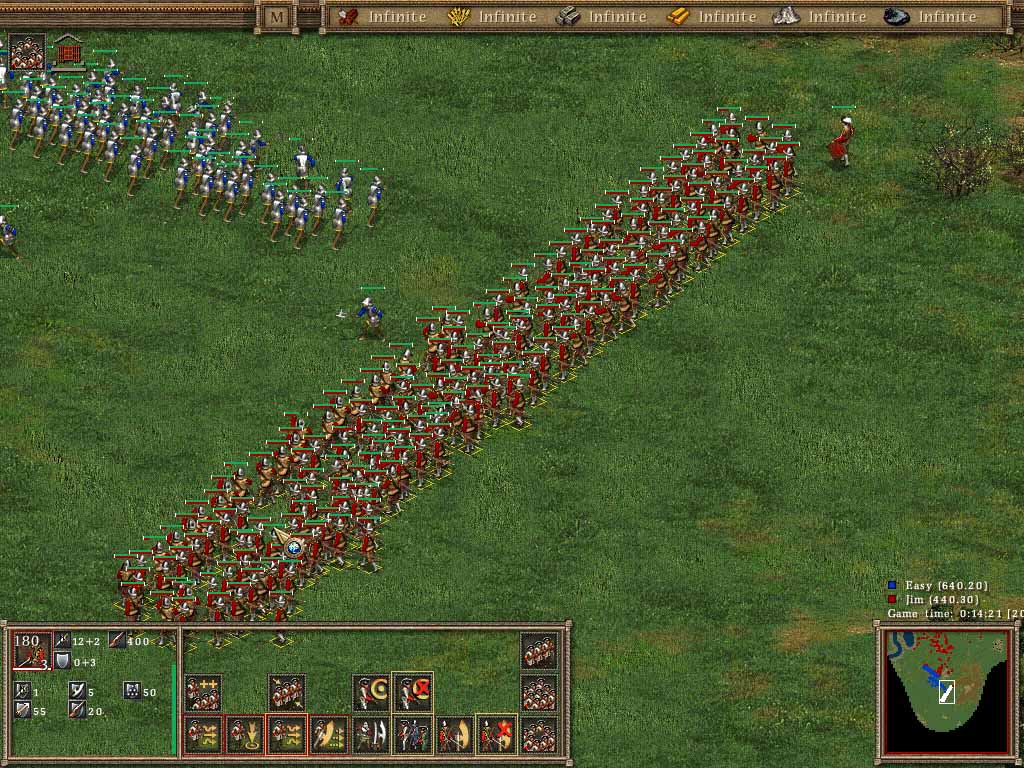 As a result, combat more closely approximates battlefield tactics of the period, including morale considerations like casualties and enfilading fire. Commanders of European troops can actually use the rock/scissors/paper approach utilized by the Great Captains of the day. Using forts as fire support, the British, French, and Spanish troops can slaughter the natives as long as not too many of them charge. Thanks to a wily AI and easy means of production, enough natives may attack to make things a challenge for almost any player. Unfortunately, the goal of many missions is complete extinction of enemy buildings and troops, and little more. The end game is too often a long mopping-up exercise, when any real-life opponent would have surrendered much earlier. A boredom factor creeps in just at the point players should be exuberant. Also, troops require strict control. Unless given clear orders, they’ll wander into the woods and attack bears and buffalo. These animals defend themselves very well, so such stupidity can be costly.

Advances and community improvements are not neglected either. All the amenities and facilities of eighteenth-century Boston or Philadelphia can be constructed and trade can be performed. However, advances are no longer the initial aim of the game but rather a function of perimeter security and secondary resource development. A powerful, well-equipped army can be fielded without development of the town center.

In some scripted missions, the new diplomacy feature plays a major role. An officer or chief can contact a neutral group and conclude an alliance by meeting a condition such as a specific amount of resources or providing more soldiers. As a result, allied troops may act independently or be commanded by the player.

Success will still go to the player that can either develop or control his resources the quickest. However, the churning out of units, the bugaboo of RTS games, has been toned down by the game structure as well as the ability to give commands when paused.

American Conquest has a multitude of play modes. In single play, the random map generator can produce a map with twelve different parameters and six opponents of variable difficulty levels with in three minutes. Players willing to devote more time and effort into scenarios have a full-powered editor at their disposal.

However, what will keep American Conquest on hard disks will be the multi-play capabilities. The usual LAN and TCP/IP options are provided with many choices between saved maps, random maps and seven historical battles. Connectivity appears to be stable. However, CDV provides an American Conquest internet shell and is the “happening” place. Many players hang around the lobby waiting for rated or unrated Death Matches of various sizes and lengths. Some games can even be viewed when played. A monthly tournament gives prizes to winners and the world’s top 100 players are ranked. A very new twist to online play is the “War for America” mode. Here, on a map of North and Central America, the player chooses a nation or tribe and then clicks on an adjacent nation. Hopefully, another player takes up the other side and joins battles. Victories accumulate points and expand empires. 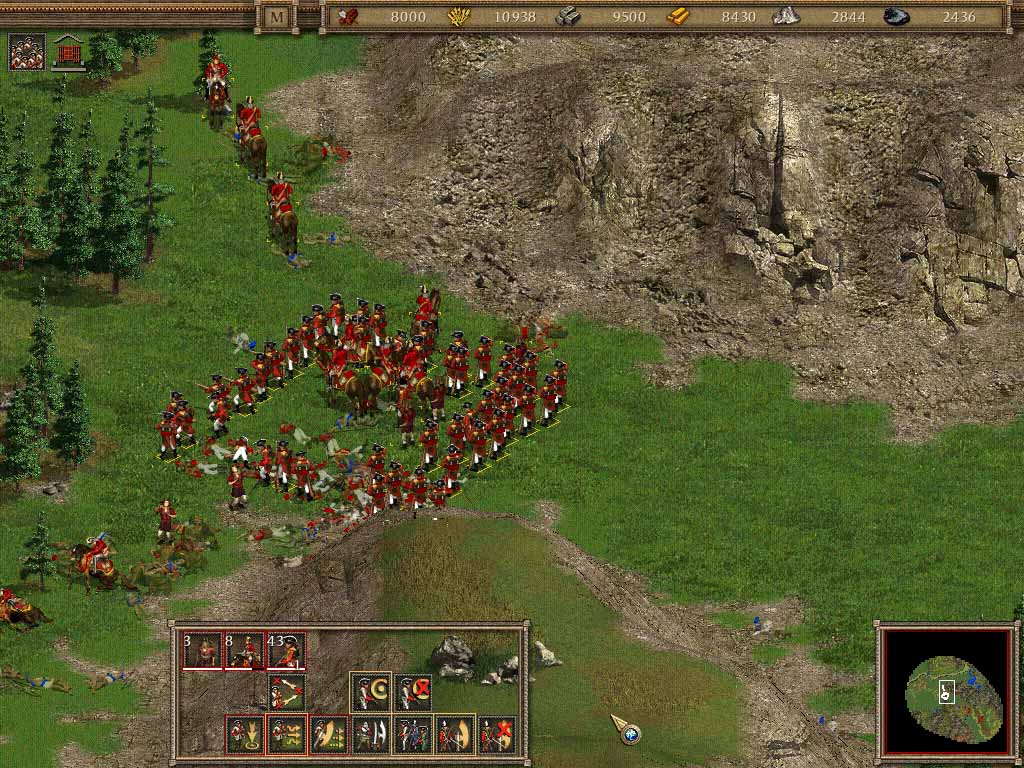 American Conquest is a significant step in the maturation of RTS games. Its play now balances resource management, town development, and combat into a fine historical balance. Can it be played as a typical “build-and-rush” exercise? Yes, but only if players consciously choose to do so. If an opponent chooses to utilize the games finer points, adherents to the old ways may be punished harshly. The pace is still a bit fast when compared to the accuracy of a turn-based or WEGO system, and my heart still belongs to turn based games. However, I’ll keep American Conquest in mind when I’m in the mood for a well-honed, sophisticated RTS.