GSC Game World and CDV Software teamed up to release Cossacks: European Wars in the spring of 2001. That’s relevant here because GSC also developed American Conquest, and American Conquest uses the Cossacks engine heavily. But even though American Conquest is a historical real-time-strategy game that takes place during the same time period as Cossacks, it’s not just Cossacks with a new paint job to reflect the change in venue. Many game mechanics have been altered, some for the better and some for the worse, and the result is an interesting and sometimes fun gaming experience.

American Conquest deals with some of the biggest battles in North America between the 15th and 18th centuries. The campaigns included with the game recreate everything from Columbus’ voyages of discovery to Tecumseh’s Rebellion to the Revolutionary War, and playable factions include European countries (like the British and French), Native Americans (Indian tribes, plus Mayans and Incas), and, of course, the Americans. The Europeans and Americans play about the same as the Cossacks factions, but the Native Americans rely on quick hit-and-run tactics, and are completely new. 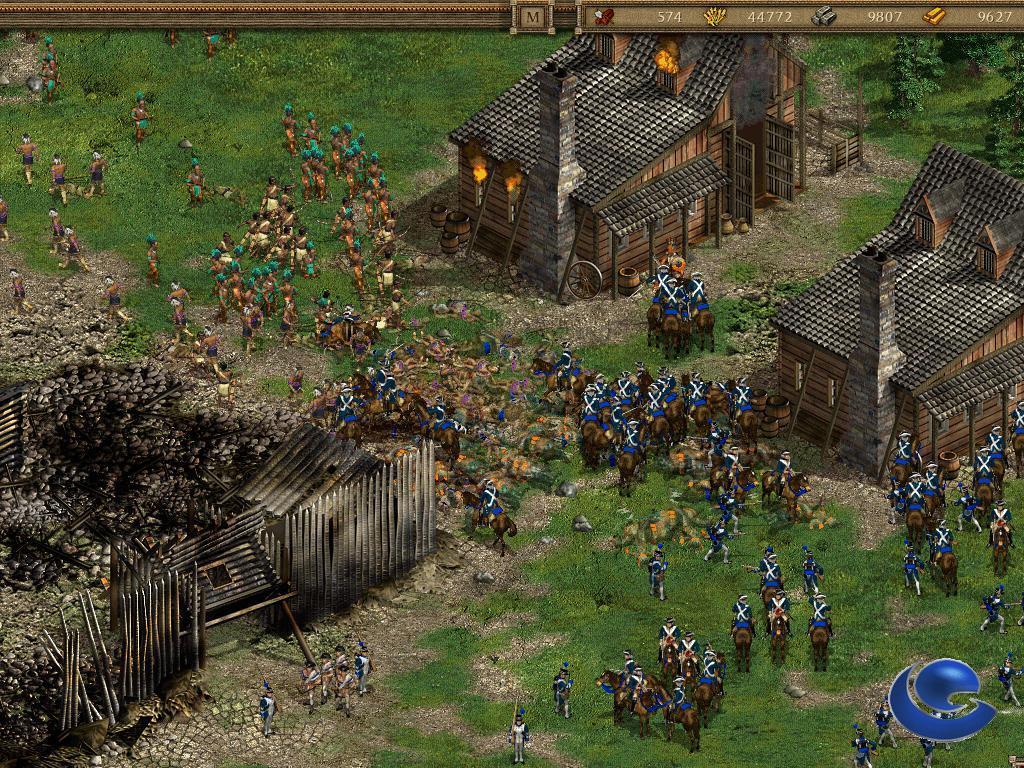 Gameplay is reasonably standard for a real-time strategy game. There are six resources to collect (food, wood, iron, coal, gold, and stone), and you spend those resources to build up bases, research upgrades, and train troops. What makes American Conquest unique, at least in part, is that it’s a “big numbers” real-time strategy game. It isn’t anything like Warcraft III with its philosophy of fewer, more interesting units. American Conquest tries to be historically accurate, and so battles include hundreds if not thousands of units on each side.

And you’ll need that many units. Unlike Cossacks where armies primarily fought against armies, in American Conquest every building can be garrisoned. That means every building is a potential defensive structure, and it means you’ll lose a lot of units when you attack a town, especially if the town is protected by a fort or fortress. (A fortress can house up to 300 units, and it comes fully equipped with a handful of cannons.) And, thus, American Conquest is a defensive game, and scenarios can take hours to complete.

One thing American Conquest brings back in its entirety from Cossacks is the resource system, and so gathering resources is once again micromanagement free. Farms are automatically re-planted for you, mines never run out of materials, and trees never disappear, so all you have to do is tell your peasants where to go, and then forget about them. The only decision you have to make is whether to dedicate more peasants to gathering resources, or whether you should spend resources to upgrade your mines so you can gather resources more quickly.

Unfortunately, the unit-producing system has been redesigned. It was handled somewhat badly in Cossacks (it took forever to train an army), but in American Conquest it requires quite a bit of micromanagement. The problem is that the main troop producing buildings are also the main defensive structures – that is, forts and fortresses – but you can’t train troops or research upgrades and have the structure defend itself at the same time. So you have to watch the structure and either pause training or cancel research (you can’t pause research for some reason) every time an enemy sends a sortie your way. Plus, you need to supply the troop producing buildings with peasants before you can train military units, and if the building is under attack, there’s a good chance the peasants will get killed, either by the enemy or, more likely, by your own buildings. So you have to constantly watch your peasants as they head towards the troop producing buildings, and redirect them if necessary. This is enough of a problem that starting at the top of the map is a serious disadvantage, because entrances to buildings are always on the bottom side (you can’t rotate them).

But as long as you only have to micromanage one part of the game, that’s fine, and battles in American Conquest can be a lot of fun. Range is important, as gunfire will do more damage the closer your units are to the enemy, and so you have to decide how close you want to march your troops before telling them to stop and shoot. Moreover, flanking maneuvers do extra damage, and troops have morale, so a timely attack can send your enemies fleeing. When GSC tried to make the game historically accurate, they didn’t just stop with the numbers of troops involved with battles.

Plus, American Conquest is nice to watch. GSC spent a lot of time with the animations of the units, and just watching, for example, gun crews maneuvering and firing their cannons is a lot of fun. It’s also a great thrill to see a column of infantry approach your fortress and get mowed down without even firing a shot. 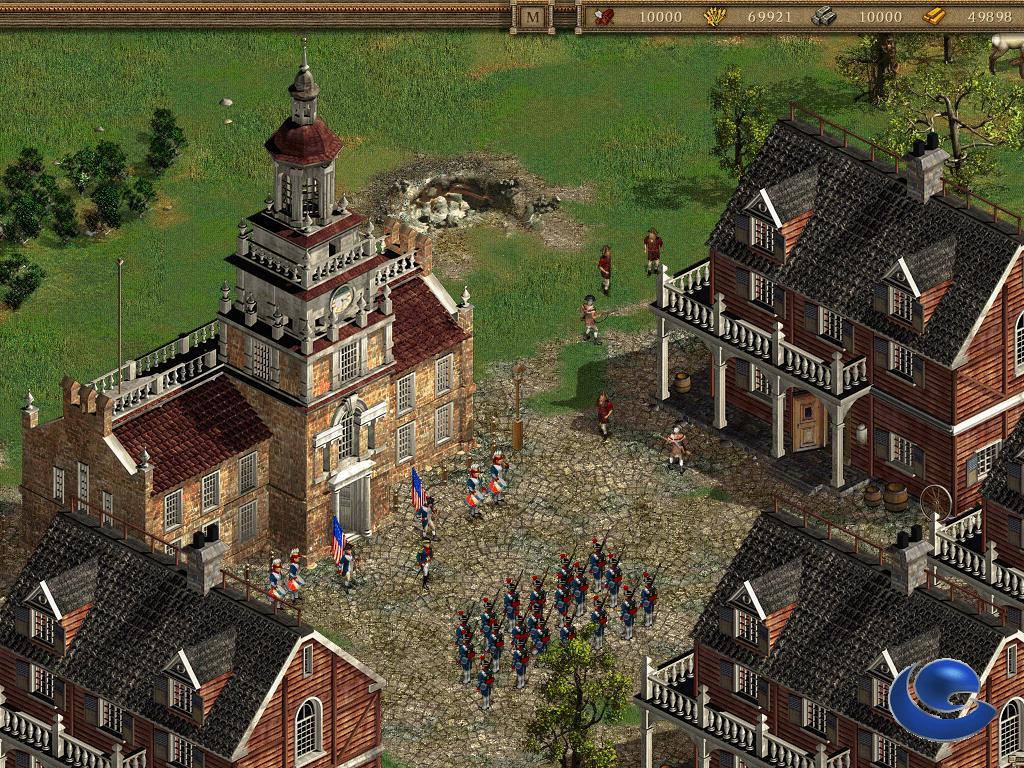 And so gameplay is largely fun except for one glaring problem. You can set an option to tell your units to be careful not to hit friendly units, but you can’t tell buildings not to hit friendly units, and you can’t tell units not to hit friendly buildings. That means cannons will happily blow up their own buildings if the buildings happen to be in between them and their targets (they’re not smart enough to move somewhere safe), and fortresses will spray cannon balls all over the place, no matter where your base is located, and mow down buildings as well. Buildings actually catch on fire first before being destroyed, so you have a chance to repair buildings hit by friendly fire (provided you have a couple dozen peasants in the area), but in a terrible omission, the game doesn’t give you any indication that a building is on fire, and the first time you might become aware of the problem is when the building blows up. This is so much of a problem that I’d gladly turn off the cannon fire from forts and fortresses if there were such an option. It’s no fun to spend an hour building up a base and an army, only to suddenly lose when your fortress mysteriously blows up and your enemies take that moment to invade.

There are also some odd balance issues. A “blockhouse” is supposed to be a defensive structure, but it’s far less useful than a supply depot or even a church. And it looks like naval warfare wasn’t tested at all. Units in the game have upkeep, including a cost in coal and iron every time they shoot a bullet or fire a cannon. But frigates in the game require about 2000 coal per volley, and so there’s just no way to have an extended naval battle. Worse, gunboats (basically a guy with a rifle in a canoe) are way too powerful. A single gunboat can hold off an entire column of soldiers, and a group of gunboats can harass frigates to death. Luckily, naval warfare isn’t too much a part of the game, but the U.S. release of American Conquest is essentially a patched version of the European release, and so it shouldn’t have obvious problems like the ones I’ve described in the last two paragraphs.

And so American Conquest can at times be both fun and frustrating. The engine looks good and runs well, but the friendly fire problems really killed whatever enthusiasm I built up for the game. So if you’re looking for a multiplayer game, you might want to wait for a patch (and hope the friendly fire problems are even on the list of things to be fixed), but if single player is your thing then you might enjoy American Conquest anyway. At least with single player you can save every few minutes, so there’s no great loss if you find your fortress suddenly in flames and need to reload.