Having thoroughly enjoyed the demo so much I was really looking forward to the finished article and let me say after playing the game for an ungodly amount of hours since receiving it, I can honestly say that I am highly impressed with Cossacks. The hard thing with writing this review is that I just don’t know where to start. 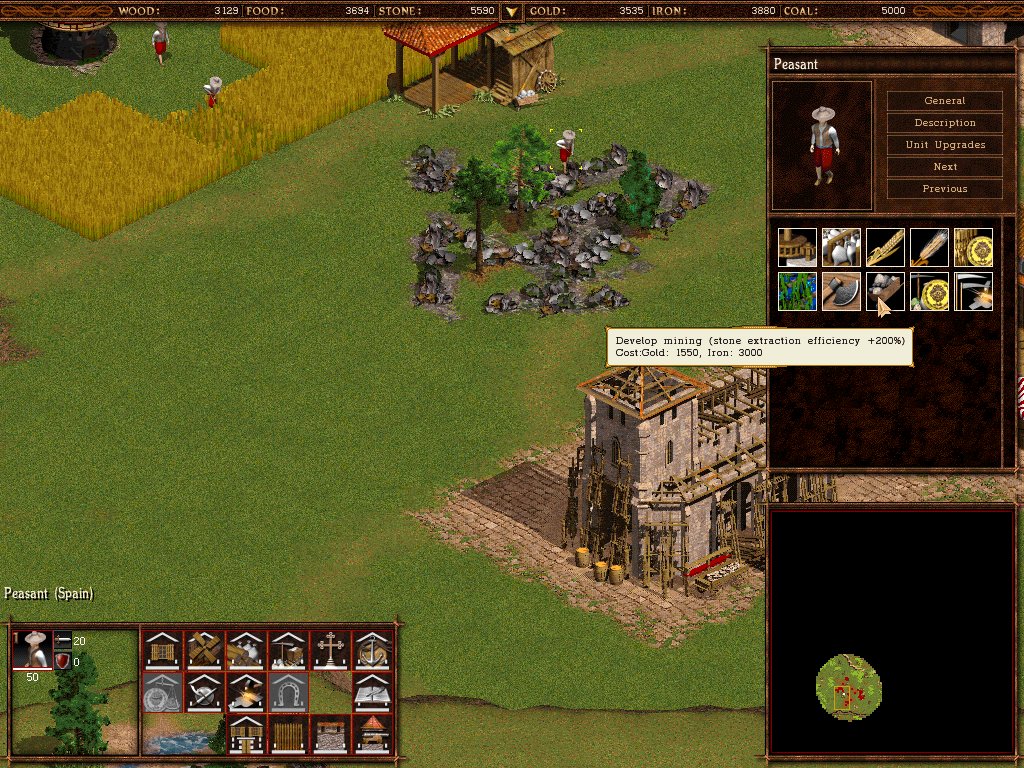 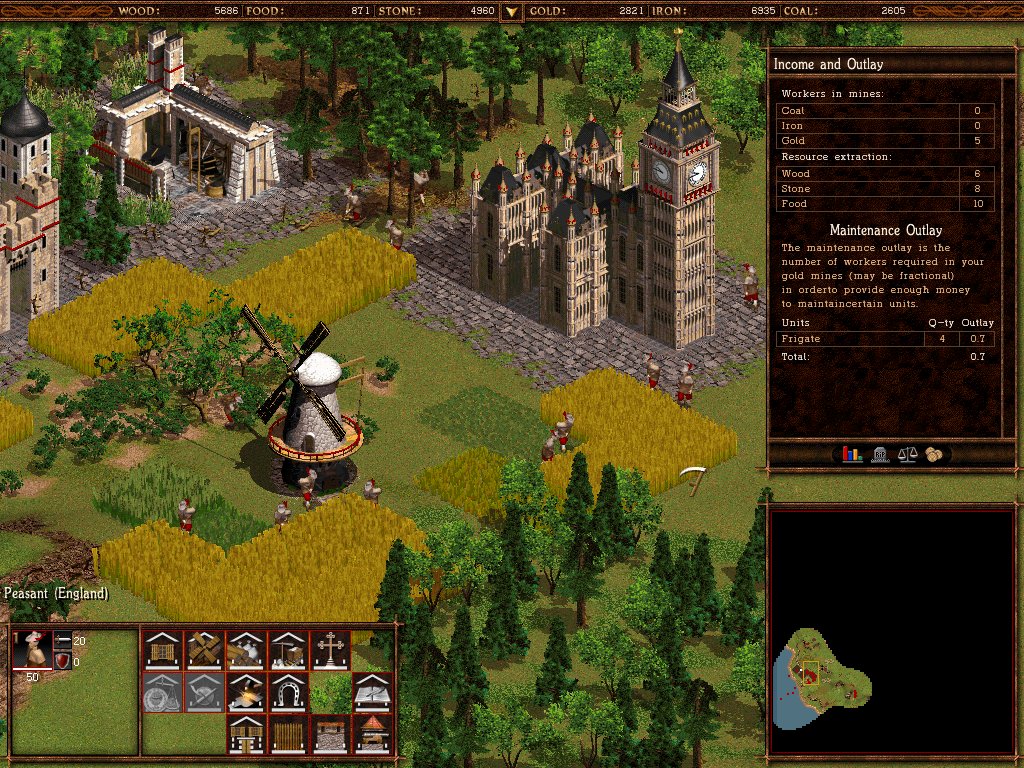 On opening the box you’ll find a very detailed manual. If you have ever seen one of those visual quick start books that shows you how to use MS Office 2000, or other professional applications, (you know the ones that have a screenshot to explain a function rather than just text) then you will very pleased to know that the manual is in more or less the same style. Everything is explained so clearly it’s as if the manual was written with the deaf gamer in mind. The manual has a very readable style and has a contents and an index so finding the bit you want is easy.

The game itself is just awe-inspiring. Forget Age of Empires 2, with its measly limits on units and tit-for-tat battles, this is the real deal. At the start of the game you have to build a town hall, which opens up a greater range of buildings to choose from. Even at this stage you will notice one key difference from AOE2, your population limit starts off at 150 (5 in AOE2) and with building some (a barracks adds another 100 to your population limit) dwellings you can increase that number to 4000. The game can handle 8000 units but it is divisible by the amount of players so 2 players equals 4000 each and 8 players would equal 1000 each etc. There are so many differences from AOE2 its unfair for Cossacks to be classed as a clone. In AOE2 a ship can only carry a handful of units across the sea, in Cossacks a ferry can carry 80 units (how many would you rather have?). 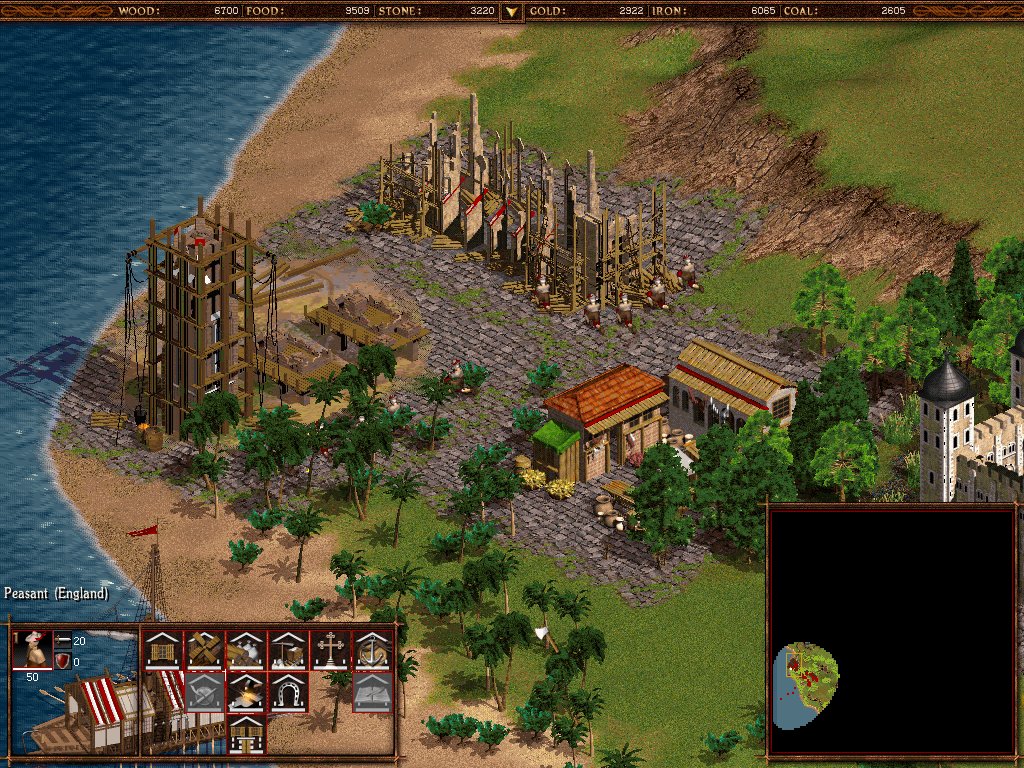 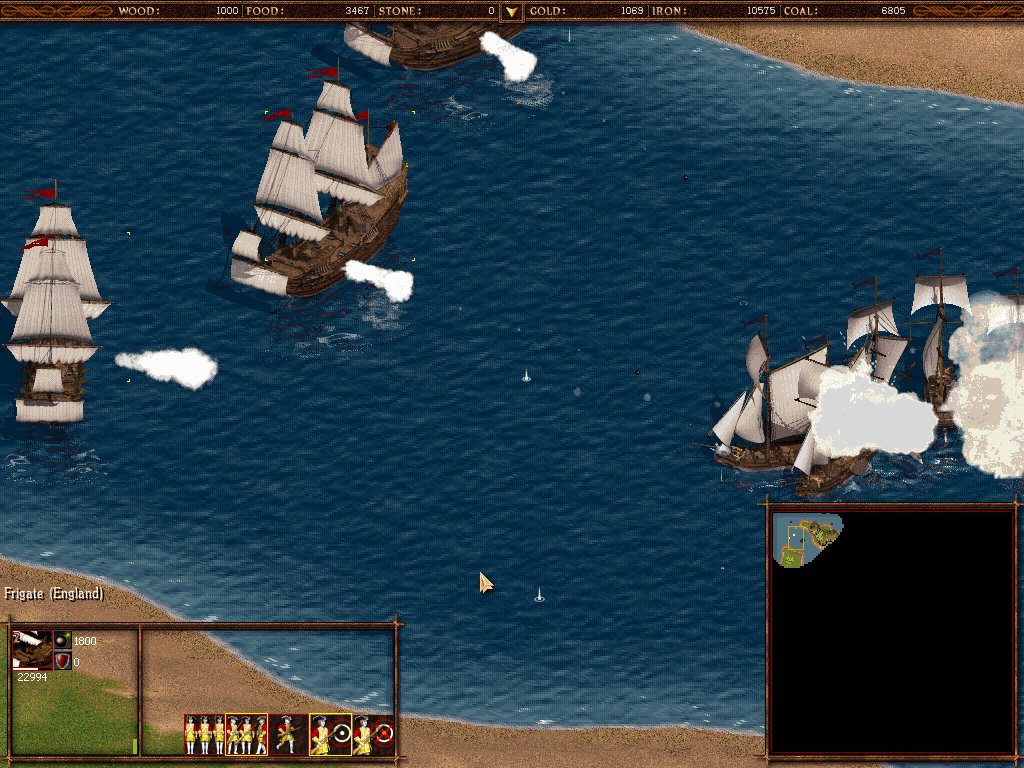 This really is superb strategy. You have a choice of 16 nations and each have their strengths and Achilles heels. The nations all have their own building sets and this in itself is highly satisfying. You know this is a serious strategy game when you have to have an officer and a drummer to perform formations. This may sound awkward but believe me the game carries it off splendidly. The game speed can be altered and it is advisable to play on a slow speed with an easy difficulty setting until you’re comfortable with everything. The tutorials are comprehensive and explain all the functions of the game.

There are five campaigns (as well as a good measure of stand-alone scenarios) which all contain a load of scenarios and it is here you will notice a key difference with Cossacks. When I started the English campaign (the Bermuda scenario) I was very pleased to see dialogue boxes relaying info to me. An example of this is that the captain of your ship communicates with you to warn you that the Dutch are to the south and pirates are to the north and thus giving you assistance. The messages that pop-up (which pause the game until you click on ‘OK’ to resume) can be recalled from the drop down menu that appears from the top info bar. Mission objectives can be recalled by the F1 key and you even receive text pop-ups to tell you that research has been completed etc. etc. The textual feedback in this game is fantastic and you won’t find yourself disadvantaged at all. The visuals are also excellent and the ship battles are a particular favourite of mine (the naval side of the game is wonderful and should be a game in its own right). 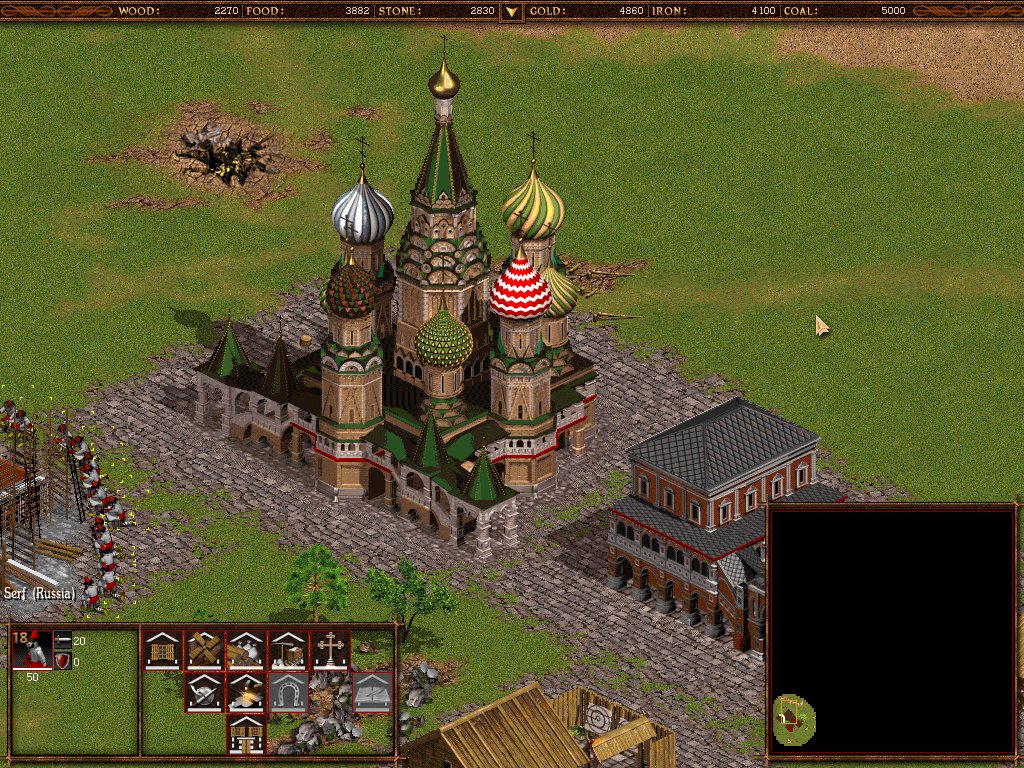 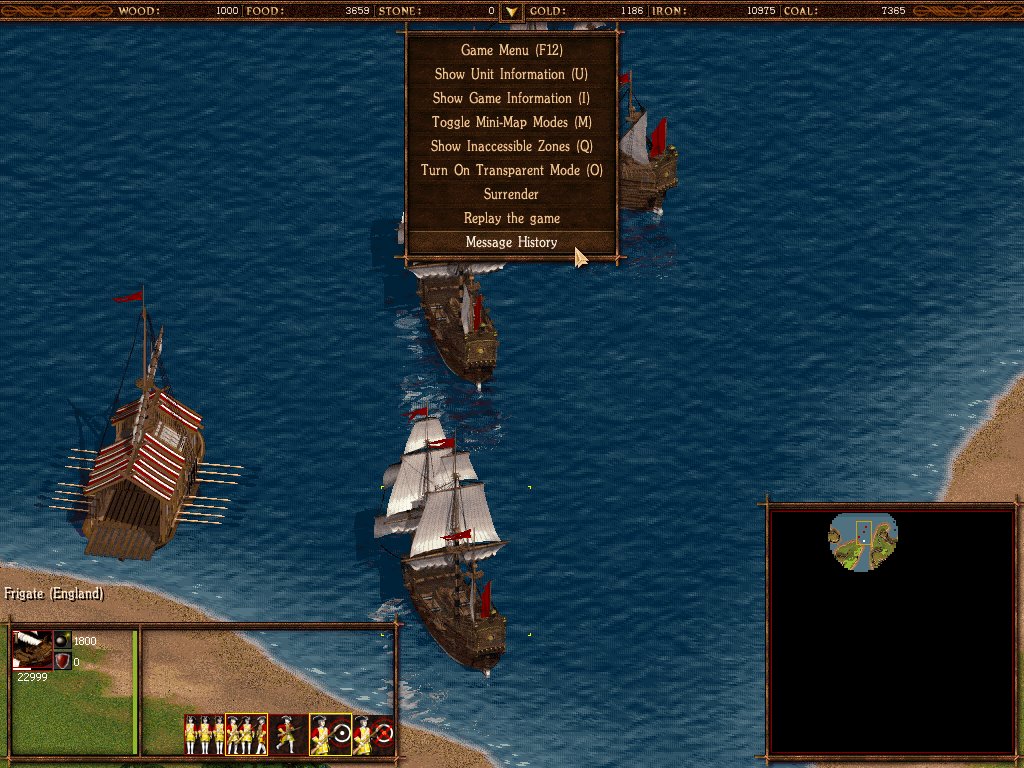 If you are used to other RTS’ you may have heard of the term rushing (this is where a player amasses a large amount of usually poor soldiers and goes off to kill a nation before they can develop) and it is often seen as the plague of the RTS. Cossacks comes up with a rather neat idea to counter this, it is called the ‘Diplomatic Centre’. The DC, once built, allows you to rapidly hire some of the better combat units in order to kill off an early attack. The only problem with the DC is that the mercenaries you hire from there have to be paid for in gold otherwise they will relinquish their allegiance to you but they do their job well and can be invaluable in the early game. Another feature that will deter rushing is the increasing costs for multiple building. In other words you won’t be encouraged to build a load of barracks and churn out a load of infantry, as each subsequent barracks will incur a higher cost. A quick press of the ‘I’ key will inform you of your nation’s standing and costs and the ‘U’ key will display your units’ info like the upgrades they can receive and the cost of those upgrades as well as a host of other important stuff.

For the single player as well as the campaigns and scenarios there is a random map feature so you’ll always have that critical replay value. The random map mode is also present in the multiplayer mode. Speaking of the multiplayer mode, there are two main sides to it. There is the deathmatch mode (in which you can use the random maps) and there is the historical battle mode. The historical battles consist of 4 main wars that include the Thirty Years War, the Northern War, the War of Spanish Succession and the Seven Years War. Each of these wars consists of various numbers of battles. Unlike the deathmatch mode the historical battles have fixed parameters and you can’t change nations and conditions. The deathmatch mode has no such limitations and you can even select the victory conditions. These conditions are territory, total destruction and score. All of this adds up to a very varied multiplayer game as well as the terrific single player. Multiplayer games can be played over the Internet or across a local area network (TCP/IP or IPX). 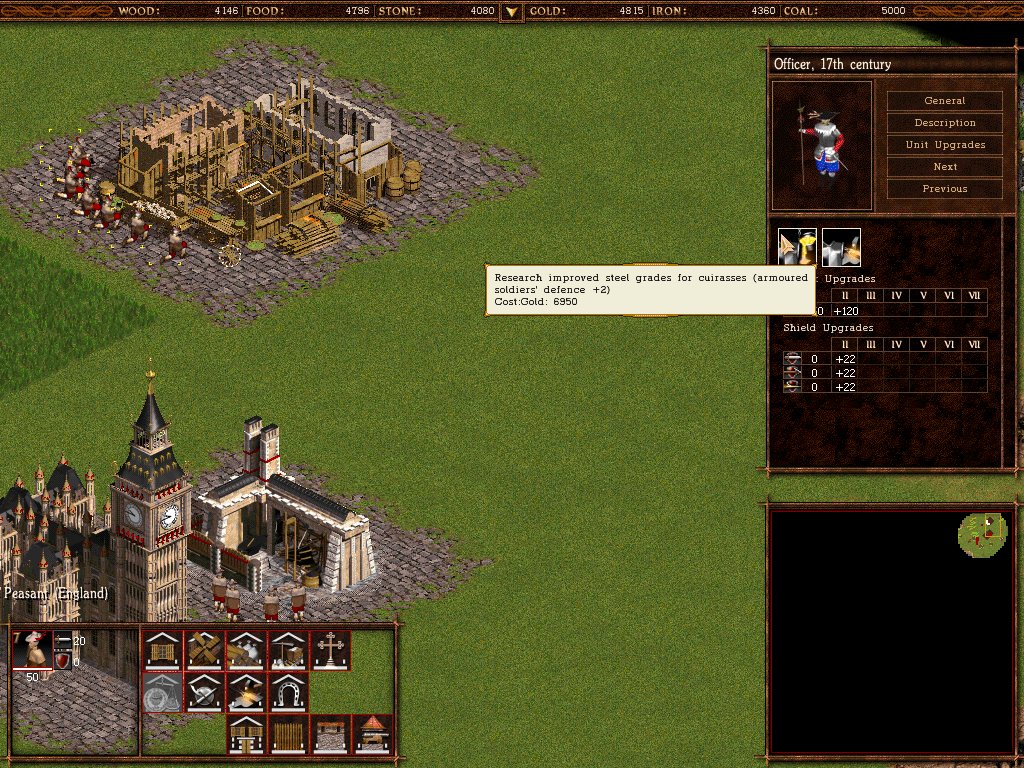 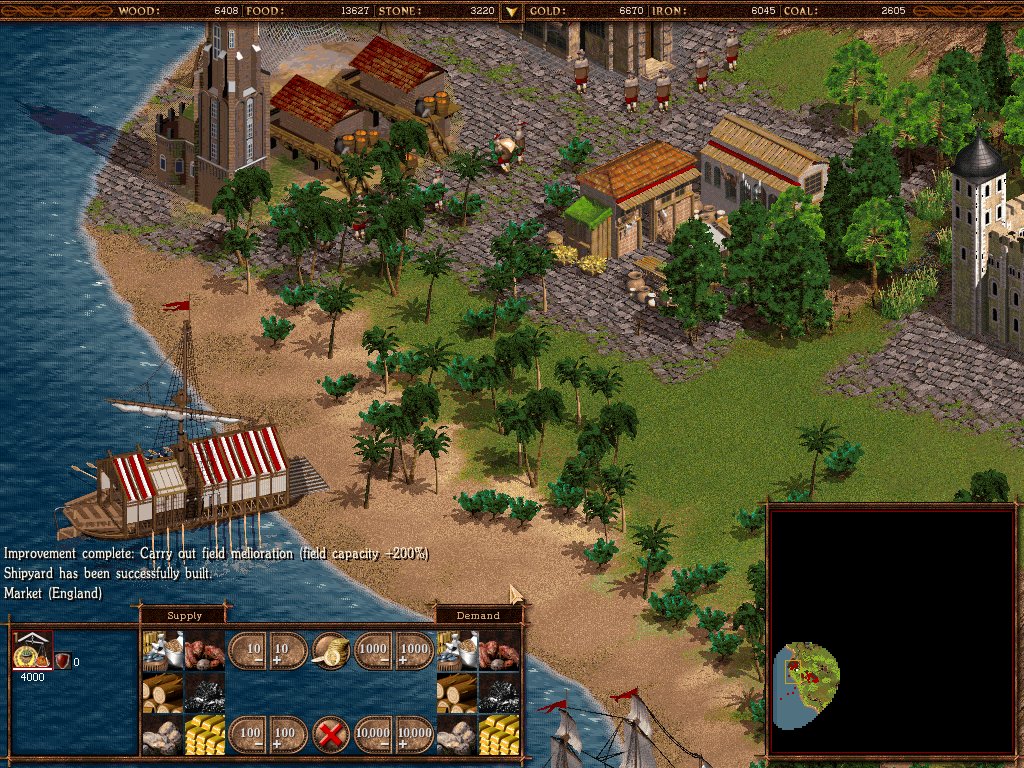 What more can I say, for a deaf gamer it’s an RTS delight and it will keep you busy for many months to come. All I can say is CDV please make a data disk so we have something to look forward to as RTS’ are never going to be the same again and after Cossacks, other games are going to be a big disappointment indeed. This game is the new yardstick by which all other RTS games will be measured and I suspect will fall short.

Overall Game Rating: 9.5/10 What a game. The best game reviewed on Deaf Gamers.

Quality of text: 10/10 Fantastic, very helpful to the deaf gamer.

Graphics: 9/10 Wonderful. In naval battles it would have been nice to zoom out a bit though

Interface: 9/10 A little different but great once you’re used to it.

Gameplay:10/10 No other RTS comes close.

Some new information about American Conquest