The emperor Napoleon’s downfall was his overreaching ambitions, so it is ironic that Cossacks II: The Napoleonic Wars suffers from the complex named after France’s infamous leader. Where the original Cossacks was a straightforward and balanced RTS, this sequel attempts to take the series in a completely new direction; like the French invasion of Russia, it comes close, but in the end fails to meet with success.

Rather than merely trying to create just another RTS with slightly more advanced units, the developers at GSC Gameworld have transformed the gameplay, adding a strategic level that is reminiscent of the Imperialism or Total War series. The heart of the game is the “Battle for Europe” campaign mode, which is not unlike the “Conquer the World” mode of Rise of Nations, where you manage your territories via turn-based settings and then jump into more traditional real-time gameplay to resolve battles. As with other GSC Gameworld titles, the game’s focus remains on historical realism, and there is enough to satisfy even the most hard-core grognard.

Cossacks II features five major powers from the era including France, Russia, Austria, Britain, and Prussia, as well as Egypt, no doubt because of Bonaparte’s early campaigns to the Nile (although the Ottoman Empire would have been the more logical choice). Each of these nations will have its own military commanders from the era that you can play as, including the likes of Napoleon Bonaparte, Arthur Wellesley (later the Duke of Wellington) and Prussian King Frederich William III. As you gain experience in battle you’ll earn promotions and get the ability to command more men. In fact, you can’t even recruit more troops until you find yourself bloodied on the battlefield. 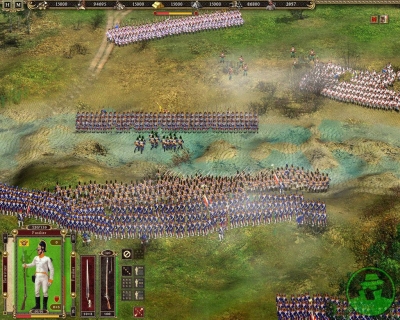 And talking about soldiers, the game has some serious variety, as the Napoleonic Wars were filled with diverse units dressed in quite colorful uniforms. Each nation has their own special unit types, such as the British highlanders and riflemen, but you can still your ranks with a variety of militias, musketeers, grenadiers, fusiliers, dragoons, and lancers. As a result, formations are a big part of the game, and keeping your men together is the key to success. This can be overwhelming to manage; although it can make for some especially colorful and engaging battles, it can add to some confusion as the scale makes it hard to tell the armies apart at a quick glance. Historically this is acceptable, but hurts the gameplay; British riflemen can be mistaken for the Prussian black uniforms or at times the French chasseurs’ colors.

In the end, trying to balance all these aspects together is even trickier than it sounds; as a result, Cossacks II is not an easy game to jump into, and can still remain all-too-challenging at times after overcoming the learning curve. Likewise, the mix of RTS and simplified turn-based gameplay in the European conquest campaign feels entirely out of place in a game so bent on historical accuracy. Unlike the Total War series, you’re practically forced to partake in the real-time battles — which can be especially tedious when you have numerous engagements to resolve. On the flip side, the historical battles that are included come off as mere “lite” versions of these epic engagements — these lack the detail they deserve and their inclusion adds little to the rest of the game. Sadly, because of the nature of the turn-based play, the campaign is single-player only. 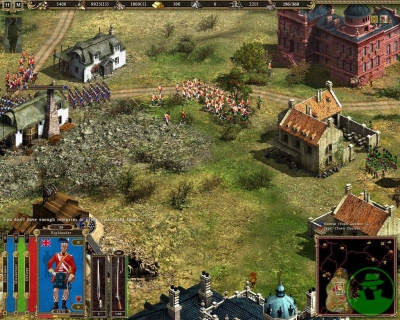 Cossacks II isn’t entirely without merit, but in the end it just comes a bit short as turn-based game, with underwhelming historical battles and lacks the rich RTS experience of the original. After a few hours, you might be left with the feeling Napoleon had on his retreat from Moscow — so close, but in the end defeated.