The Mode – Battle for Europe

You can play for one of six nations in the “Battle for Europe” mode. The game begins on the global map. Here you can see all the territories subordinated to you or to your enemies, their defense level, the presence of opponent’s commanders in these or other sectors as well as information on relationships with other states and extraction of resources. The capture of Europe occurs when all opponents’ sectors have been seized or ceded to a player. During one move you may transfer your commander and army to another sector (either enemy or an allied one), make trading Resources exchange, conclude a diplomatic treaty or sabotage hostile territory, make improvements to available sectors, and enlist new units from among the available recruits.

To attack the hostile sector or to move through your own sectors, drag the figurine of your general on the Global map from one sector into an adjoining one. After clicking with the mouse left button on your general, you may see red and green pointers which show where he can actually move from this sector. Upon transferring your leader into the sector you select, you will have made a move. The red pointer indicates attack into a hostile sector, while a green one indicates movement into an allied region. As you appear on the enemy territory, you enter the real-time game mode consisting of seizure of strategically important targets, battles with the enemy troops, and accomplishing secondary quests.
When the enemy attacks one of your sectors without your leader in it, the battle is determined automatically, without your participation. Such attacks can result either in gaining your sector by the enemy or his retreating. If the enemy attacks a sector with your leader in it, a real- time battle ensues.
Battle for Europe is a turn-based game mode; therefore you can make only one move at one time (however, on rare occasions you will be notified if you can have two moves in one turn). 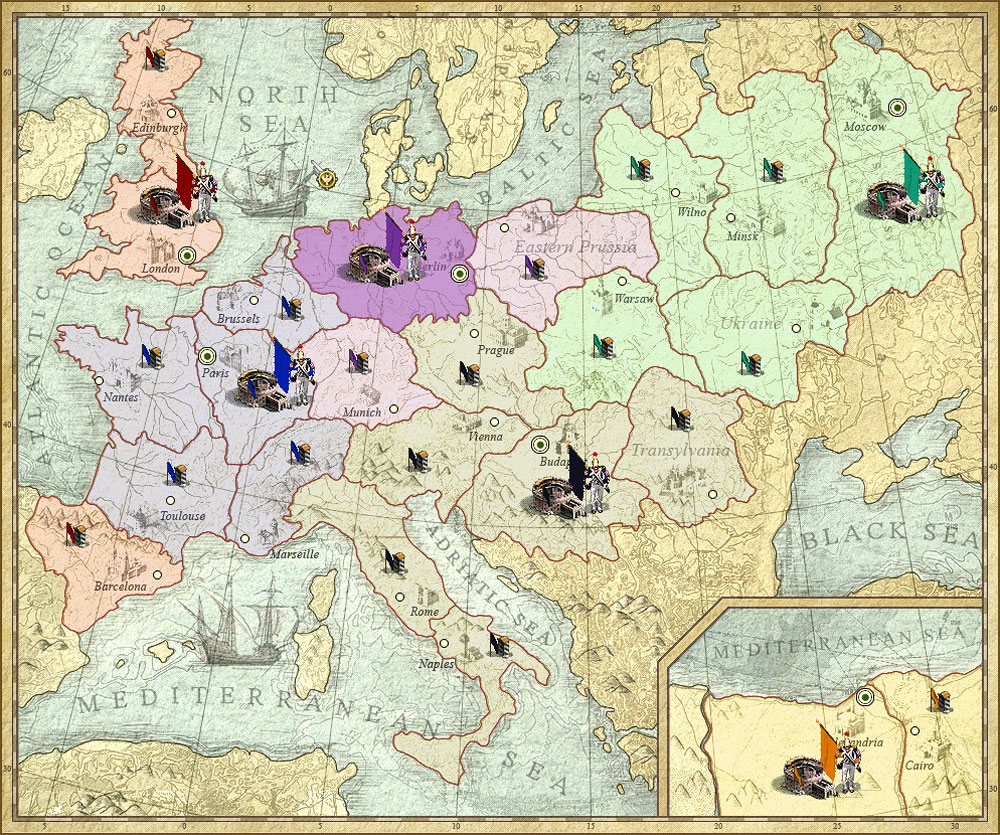 The Battle for Europe is a logical continuation of the campaign, yet a player runs the game on his own. The primary goal of this mode is to conquer Europe by gaining the territories of other countries. After you have chosen your nation from the Profile menu (see page 8), enter the Single Player game and select “Battle for Europe.” The global map of Europe, divided into sectors and marked with colors of the country, will appear in front of you; the game will take place on this map. For example, you choose to play for Austria. Your neighboring countries are Russia, Prussia, France and Egypt. You can either attack one of weak sectors of one of these countries, or conclude a diplomatic treaty with one of them, start reinforcing your own territories, or combine all these actions if you want to. You can still lose a sector after you have conquered it if your opponent’s attack turns out to be successful. You will have to keep an eye on the entire empire to avoid defeat. Choose your difficulty level at the start of the campaign – it cannot be changed once the game is in progress.

Why doesn't the game start after installation? Please check to confirm you have the correct Cossacks II: Napoleonic Wars game play CD in...

Military tactics of Napoleonic period Napoleon developed and put into practice the first concept of blitzkrieg. Bonaparte was the only...

Infantry musket At the beginning of the eighteenth century, a famous French fortifier engineer, Vauban innovated what would seem...

French Cavalry Probably, none of the contemporary commanders appreciated cavalry as much as the emperor of France did. Being well aware of...

Musketeers Russian infantryman was a steadfast and courageous soldier. At the same time, he was illiterate and badly equipped. A...