Age of Empires is the first thing that came to mind when I originally saw this title. The graphics looked similar, the interface looked similar, and the overall design looked almost the same. After playing with this title for awhile I can say unequivocally that it is not Age of Empires. Cossacks is more advanced than AoE, and simply more fun to play.

Published by Strategy First and developed by Ukrainian based GSC Game World, Cossacks: European Wars is a real-time strategy title. Players are expected to build a nation with peasants and develop a large army capable of defeating opposing nations. You must be able to do this, while managing resources and being attacked on all sides by opposing nations. Cossacks: European wars spans throughout 17th and 18th Century Europe, when wars were non-stop and every nation wanted as much land as they could possibly obtain.

UUpon first launch, this game looks almost exactly like Microsoft’s Age of Empires II, but once I began playing, the differences were plentiful. Cossacks: European Wars involves sixteen different nations, including England, France, Russia, Spain, Poland, Turkey, and Sweden. Upon first launch, you will be greeted with one of the most beautiful introduction movies ever produced. It really sets a mood for the game, and that is very important in a title such as Cossacks. A huge variety of scenarios are available to play with each of these having different objectives and outcomes. A random map generator is also available, adding further game play to Cossacks. 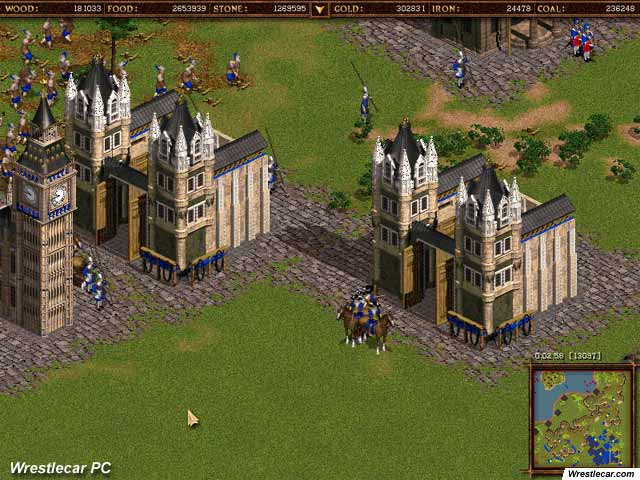 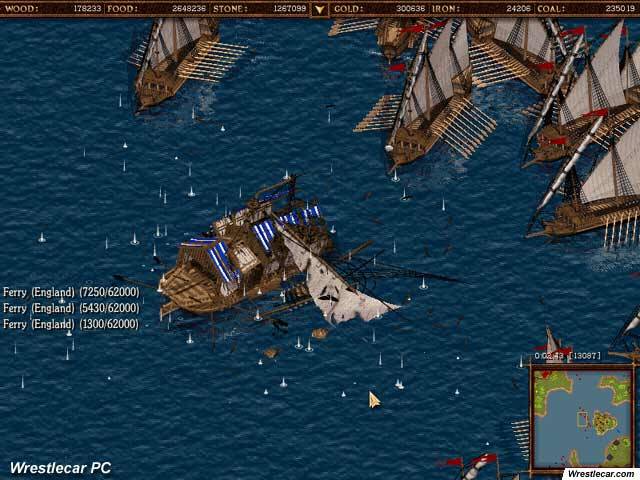 My first excursion onto the battlefield was in one of the simple scenarios where the objective was to simply defeat your enemy. Since the general game play and navigation is very similar to Age of Empires, I was already familiar with the general interface of the title, and found it relitively simple to navigate through Cossacks. The menus are simply incredible, some of the best looking I have ever seen. They offer simple navigation, with many tools for experienced players. After building a town hall and a few units, only then did I realize how complex and involved Cossacks really is. It is a lot of fun to take about 800 soldiers and 75 cannons into the enemy city and bomb them until only a massive pile of rubble remains. Cossacks sure has a huge realm of playability within it, and even that is a huge understatement.

For those with multiplayer capabilities, you will be very happy to learn that Cossacks includes free multiplayer online gaming. Players can join using TCP/IP, IPX, LAN, or the integrated multiplayer matchmaking service. Multiplayer is the heart of Cossacks: European Wars, and is its most addicting and challenging aspect. Up to six players can compete in one massive multiplayer game, with only the best player claiming victory. Strategize and team up with other players to eliminate a powerful enemy, or bring him to his knees. Multiplayer gaming is very enjoyable as it involves much more strategy and teamwork than single player gaming. The only problem I encountered with the multiplayer connections were that there is a slight pause when instructing soldiers and civilians to complete tasks or move to another location, but this is to be expected and is not a major hinderance. The only other problem I found was that I always seemed to get slaughtered on the battlefield. Guess I’m going to have to practice some more.

The number of buildings included within Cossacks is massive. Each building has a different objective and serves a unique purpose. One of the more important buildings is the mill, which is used to seed fields and collect food. Barracks are used to create soldiers and light infantry, while stables are used to create horsemen. Looking for some heavy artillery? Building an artillery depot is an excellent way to create cannons and mortars, and is the perfect way to blow your enemies to the moon. Other buildings within Cossacks include Town Halls, houses, Blacksmith’s, Towers, Shipyards, Mines, and markets. Fortification is very important in Cossacks, but players must plan before building any walls or gates as they take a lot of resources to maintain. Without walls though, you’ll find that your enemies will walk in and take over your whole city without any problems, so they are definitely necessary. If walls are built, it will take a lot more than just a few soldiers to take over a city, but will cost a huge amount of resources to maintain. Two types of walls are available; these being wooden paling and heavy stonewall. Wooden walls are very easy to destroy, but are also quick and easy to construct. Stonewalls take a lot more firepower to destroy, but unfortunately, cost a lot of stone to build, and even more stone to maintain.

Although the large number of structures may be impressive, the massive number of units is even more incredible. Cossacks allows up to 8000 units on one single map, so if two players are competing, each team may have up to 4000 units. A wide variety of military units are available, these ranging from infantry soldiers to riflemen and horseback riders. Other units include cannons, mortars, grenadiers, officers, and many more. In many scenarios and random maps, battle at sea will be a crucial aspect. Cossacks: European Wars includes the ability to create several types of ships, these including battleships, frigates, and gallies. These are very powerful tools if used properly, and sea wars require more attention and strategy than battles on land. Cossacks also includes the ability to create ferries, which can transport units such as soldiers and heavy artillery over the water to other areas of the map. This is sometimes the quickest way to transport soldiers, as it sure beats walking. 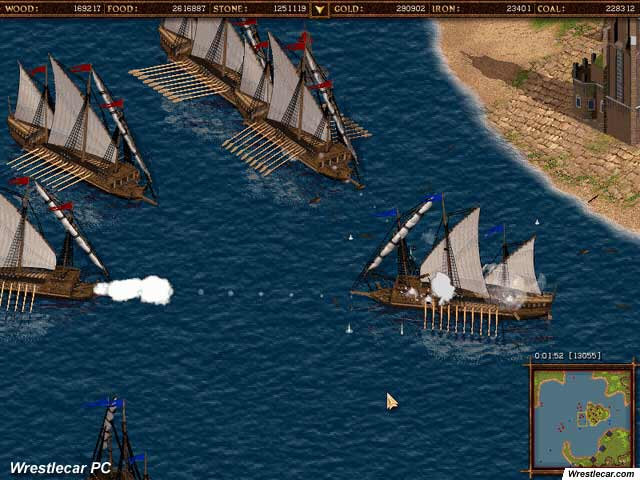 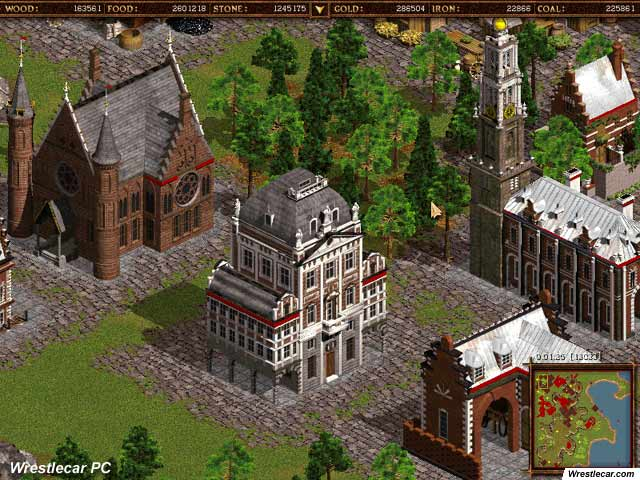 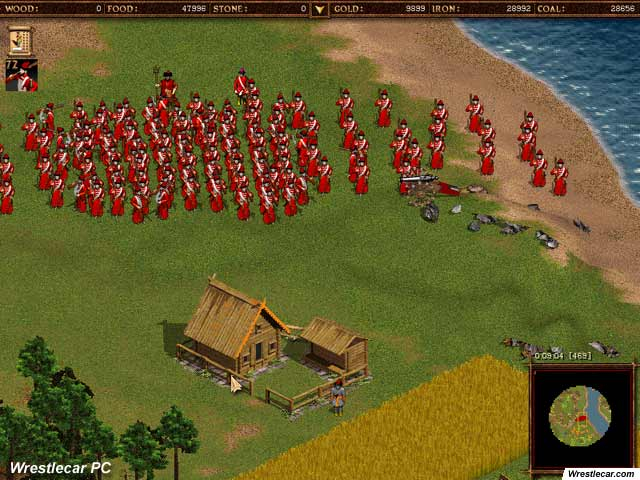 Cossacks: European Wars is all about resource management. Managing food is critical. Should you happen to run out of food, even for a second, your soldiers and peasants will quickly die off due to starvation. Players must build mills and assign a large number of civilians to the duty of collecting food in order to keep the population steady. Almost all buildings require the use of wood for construction, and this is another important resource. Coal and iron must be mined and are used for upgrading units and constructing other units. Without these resources, artillery and towers become useless, as they have no shells to fire. Gold is consistently used throughout Cossacks, as it is required for almost everything. Some soldiers created using a diplomatic center will not function without gold, and should you run out of gold while using these special soldiers, they will turn against you and kill everything in sight, including your civilians. Gold must be mined, and it can be a daunting task trying to keep the supply flowing as enemies usually target gold mines first. Strategy and resource management are some of the most critical aspects of Cossacks, and this is what makes the game so challenging and enjoyable to play.

Graphics are a very important aspect in any real time strategy title such as Cossacks, and GSC Game World has done an outstanding job. The graphics are very clear and crisp, with very high frame rates. The buildings and soldiers are incredibly detailed with a wide variety of bright and colorful textures. Almost all nations have access to all of the buildings available in Cossacks, but each nation has a different method of construction, and therefore, each nation’s buildings have their own unique look. Structural details in Cossacks are incredible, as are the detail of the units. The movement of the units is very smooth and looks very realistic. Exploding buildings and walls result in a tremendous amount of flying debris and look absoultely fantastic. Anyone who happens to be in the vicinity of this debris will be killed instantly by the deadly projectiles. Flames shooting out of burning buildings are very well done as well, and look very realistic. The terrain is completely 3D, with piles of stone and thick forests covering the ground. Cliffside’s can provide an excellent tactical advantage for cannons and riflemen, as it is a great advantage to be up on a cliffside shooting down at your enemies. Overall, the graphics are some of the best ever seen in a game such as Cossacks, and we would find it very difficult to improve upon them.

Cossacks: European Wars has a huge technology tree available, and upgrades to units are the key to success. Players can construct an academy to upgrade units and structures, and these upgrades can often give you the edge required to defeat your enemies. Training drills and other such drills can be run and will improve your infantry’s offence and defense, helping to keep them alive on the battlefield. Other upgrades such as “wheel-lock” are a necessity for riflemen to perform optimally. The massive manual included with Cossacks shows players a technology tree for each civilization in full color, and detail about each structure and unit. Should you have problems deciding on what upgrade is more important and will have more of an affect on your nation, refer to the manual, as it is the only tool you will need. 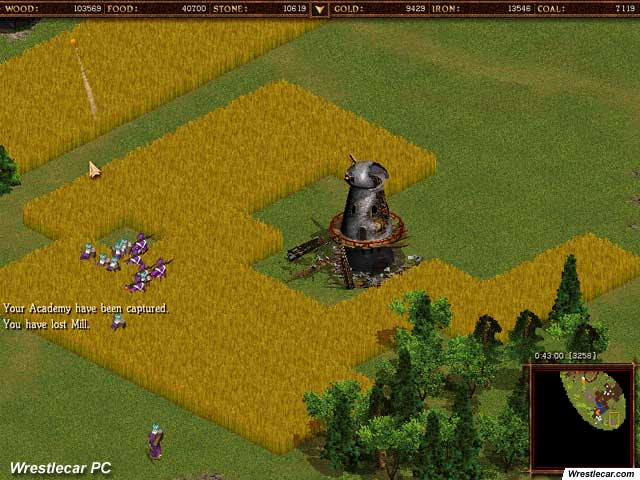 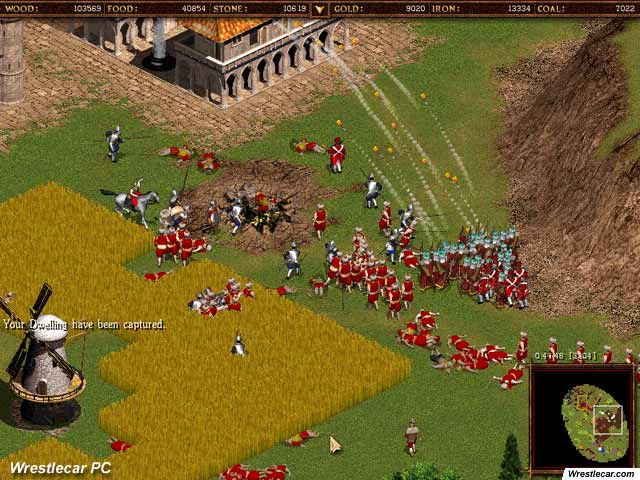 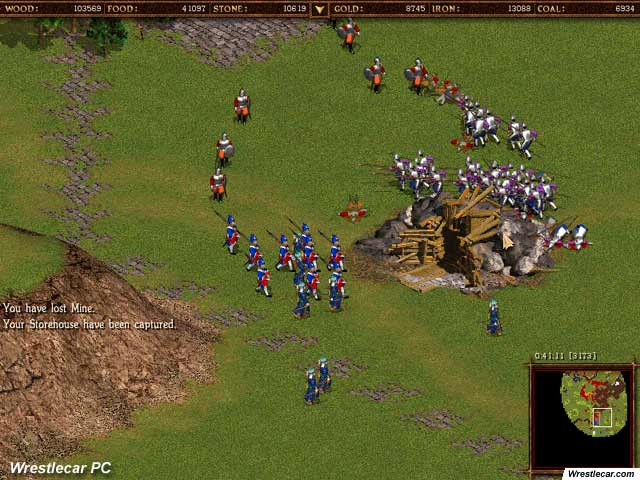 The sounds in Cossacks: European wars are very similar to Age of Empires II. Players have the option of listening to background music or disabling this to hear the in game sounds more clearly. The background music selections are rather unique, and reflects a style of music that fits with the genre and time span of Cossacks. The sound of gunfire and artillery fire is excellent, and really blends in with the rest of the game. Grunts of peasants as you assign them duties are heard, but are a little low in volume compared to the other sound effects. Explosions are clearly heard, but are usually muffled by your cheers in destroying an enemy objective, or your screams of frustration as an enemy advances on you. Overall, GSC Game World has done an excellent job on the sound in Cossacks, but a larger variety would be an improvement.

Strategy is what war is all about, and Cossacks is no different. Players must plan ahead and be prepared for anything that an enemy may throw at them. Players can assign units to follow military formations and use military tactics in defeating opposing nations. If an officer and a drummer are present, massive numbers of troops can line up and attack all different sides of a city in a deadly formation. Cossacks is all about strategy, and the ability to use real-life attack and defense procedures to control thousands of soldiers in the heat of battle is a great aspect.

Overall, Cossacks is one of the most addicting and fun games I have ever played. Extraordinary graphics and a massive number of units and buildings are what make this game so unique, and so much better than its competitors. If you are into any type of strategy game, or are a fan of Age of Empires, Cossacks is well worth the money and will keep you entertained for many hours.