Mention the words ‘historical strategy’ to many people and if they don’t get away in time to “stop their granny eating the cat” or some such excuse, they’ll fall asleep faster than if you placed a chloroform-soaked rag over their mouth; it’s a weapon so effective it could be used to stop advancing armies.

But it’s also a phrase that’s often misleading because while it can conjure up images of the anorak-wearing population spending day after day calculating action points and firing modes, it also covers the likes of the fiendishly addictive Age of Empires and the Settlers series. Granted, neither of these games are anything like the relatively fast-paced rompings of the likes of Red Alert or Ground Control, but they are significantly less banal. Fortunately (for me), Cossacks is an example of the latter type of historical strategy. 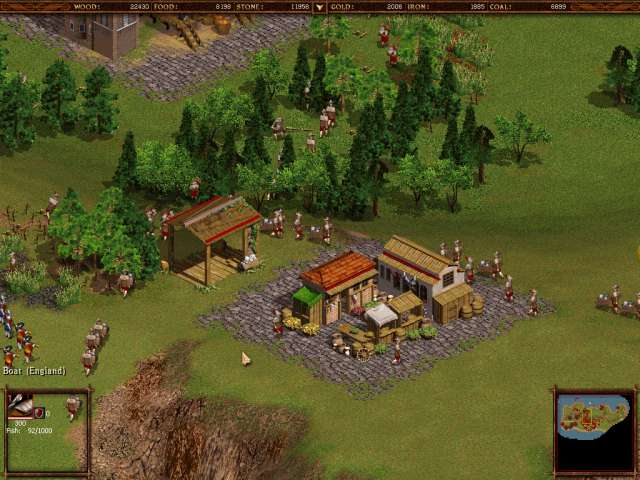 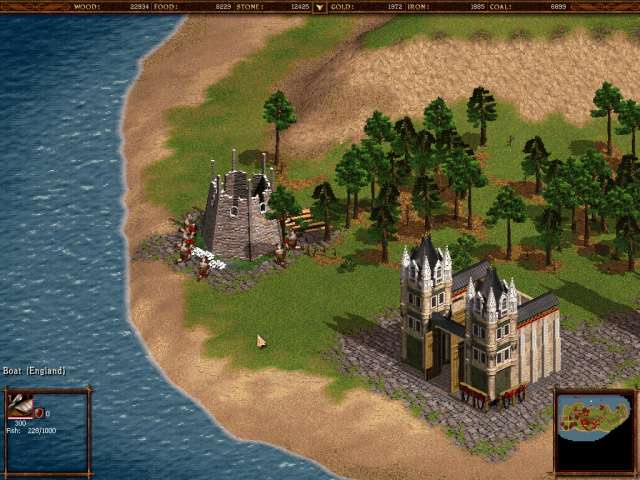 Y’know, there’s nothing like exploiting the workforce in order to achieve your goals
You are an esteemed military commander from whatever European power the campaign features. Your objectives vary from mission to mission, but usually go something along the lines of build a base, establish a decent economy and kick foreign ass. Obviously, to do this you need to gather resources. Wood and stone are used for building the various structures your town will need, iron and coal keep your military units in ammo, gold is useful for just about everything and food stops your people from starving to death — handy that.
You can get food by building a mill and telling some peasant folk to start farming or by building some fishing boats. Iron, coal and gold need to be mined, stone is quarried, and wood, believe it or not, grows on trees which you will need to chop down. By now, some of you will be thinking all this sounds a little familiar – ahem, Settlers. As far as extracting resources is concerned, the two games are identical save for a few very minor differences, such as not being able to mine stone and quarry it or rear pigs for food.
Cossacks does include a marketplace, however, since it’s not always possible to get the goods you need. The only gold mine, for example, might be deep in enemy territory and it’s virtually impossible to mount a decent assault without a healthy gold reserve. This is where the market comes in handy, as it allows you to trade one resource for another. Got a huge pile of timber but no iron? Trade it. Got loads of coal but no food? Trade that, too.
There is a downside to this that isn’t all that apparent in the single player game. The ability to trade for any resources that you need means you don’t have to worry about guarding any one specific resource. If the enemy takes your coal mine, all you have to do is move the workers onto another resource and trade for coal from the marketplace. Thus the strategic importance of any resource drops to virtually nothing. 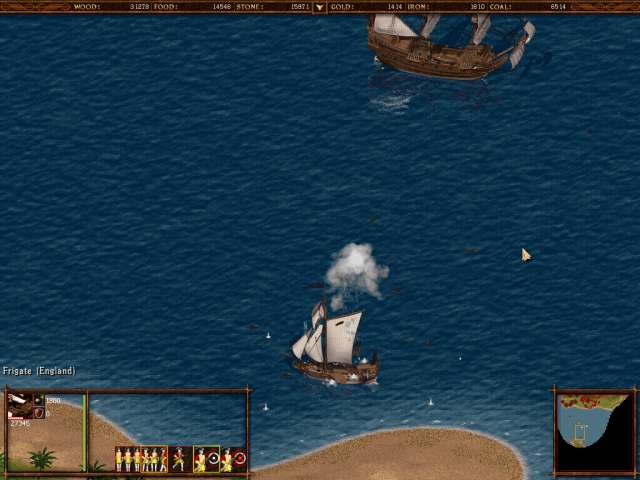 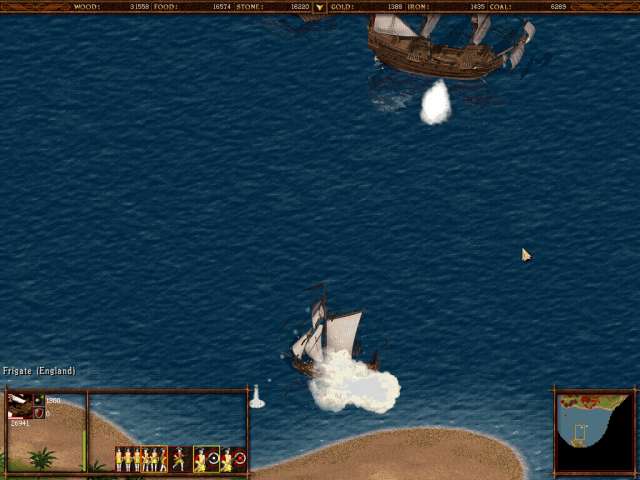 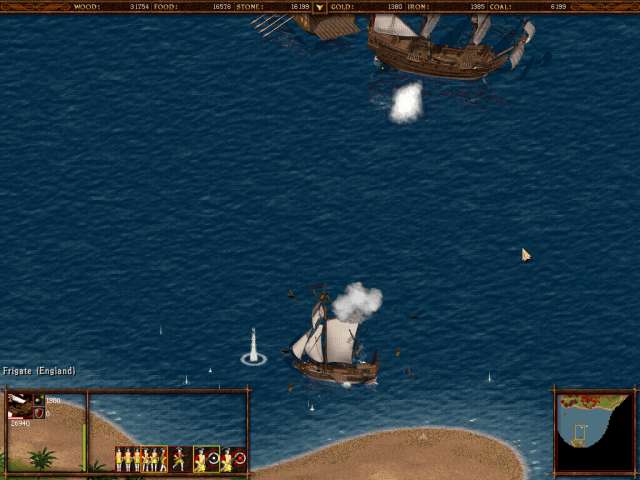 Captain Hook would be shivering in his boots if he had to play this
The resources also have a direct effect on combat. If you’re unfortunate enough run out of iron and coal, your units will run out of ammunition and won’t be able to fight the enemy. This can be a bit irksome when you’ve almost beaten that dirty great battalion of musketeers and your troops are suddenly shooting empty barrels because you forgot to take a trip to the market. Combat is also surprisingly frantic and for all my berating of the duller turn-based games, I can’t help but feel that Cossacks would benefit greatly from a Baldur’s Gate style pause system where you can halt the action but still issue orders.
The reason for this is because the combat has a great amount of depth and if you play a lot of multiplayer, you’re guaranteed to be playing Cossacks for a long, long time. Getting the right troops in the right formation against right opponents is critical. Sending Pikemen to assault a tower would be suicide, but if you were to send in some howitzers and back them up with one or two grenadiers you’d be in with a fighting chance. Likewise the formation of troops is also important as you get certain combat bonuses to attack and defence, which can make an incredible difference. Get the formation right and you’ll walk it, get it wrong and you’ll be absolutely murdered. There is no middle ground.
The graphics, as with so many games of this genre, are pretty impressive. Even my increasingly decrepit P3/450 can run things smoothly at a relatively high 1024×768. Little men scurry about convincingly, trees flutter in the wind, but the best thing has to be the explosions. Instead of just being a generic ball of flame, any big bang is accompanied by a large amount of debris chucked into the air with great enthusiasm. Not all of your shots will hit – in the case of musketeers and archers, this doesn’t mean an awful lot as far as flashy graphics are concerned, however, when it comes to a naval battle, cannonballs splash in the water with a pathetic plop when they miss, but make a big boom and send a shower of timber up in the air when they hit. A very nice touch. 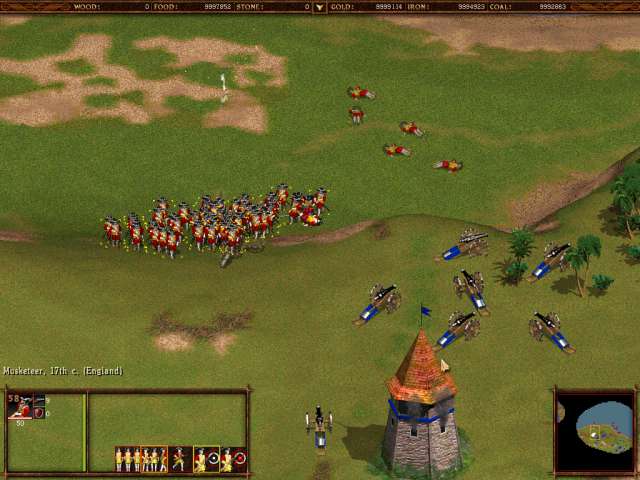 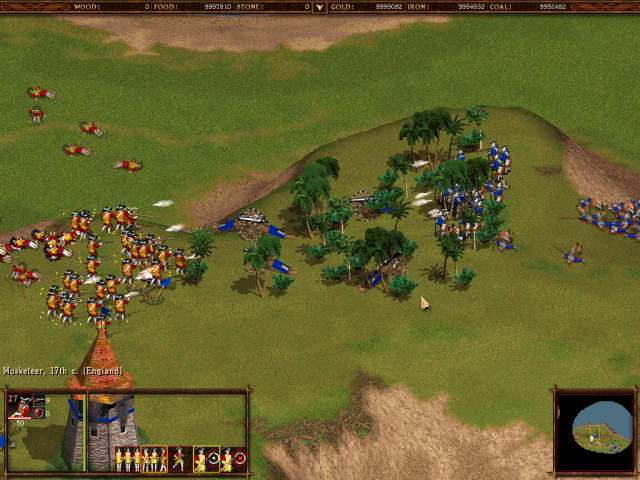 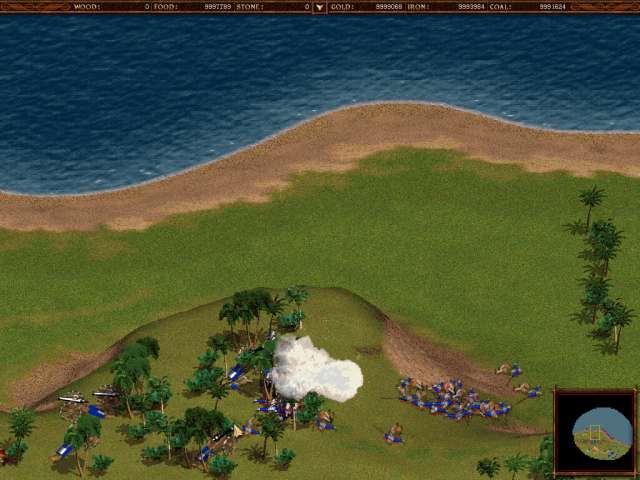 Battles can be a bit bloody sometimes…
However, one of the things you’ll find yourself working around is the atrocious unit AI. The pathfinding of units is the first clue that something is wrong. Send a ship to the other side of an island and it’s 50/50 whether it’ll go the long way around or not. Squads of soft, squishy archers seem quite happy to walk straight into the firing line of nasty enemy howitzers when you tell them to back off. But perhaps the strangest sight is ordering your ships to attack a fleeing enemy. After pursuing into firing range, they stop and turn their side to the enemy (that’s where they keep the cannons), but by the time they’ve finished spinning around, the enemy will have fled out of range, so they catch up, stop, turn around again etc.
It’s also easy to pick off enemy units one by one, as the others don’t seem to react to what’s going on around them. You can bombard the crap out of them and they won’t do a thing until you get in range or trigger a certain event. They also seem quite keen to attack the floor. Although sometimes a unit will tell you it can’t hit the specified target because something is in the way, more often than not it just stands there and pounds the living hell out of an offending hill that just happened to get in the way. Which brings me to ask why cannonballs aren’t lobbed over the hill?
Now with all this negativity you will probably be wondering why I still like it. Well, it’s partly because of the multiplayer and partly because of the resources. The multiplayer takes away a lot of the problems you get with the single player game. If you’re desperately trying to organise your troops mid-battle, you know your opponent’s trying to do the same. You know that he also has to mollycoddle his ships into going the right way and attacking your diversionary ferries properly, and most of all that he’s suffering from the same bad unit AI. The resources might have been ripped off from Settlers, but they’re perfectly balanced and you get a genuine sense of achievement as you build a thriving town from a few sticks and a couple of peasants.
Conclusion
Getting Cossacks to play single player will be largely enjoyable but also frustrating at times, due to the poor AI as well as a surprising amount of scripted events that, rather than adding to the dynamism of the game, take away your sense of control. But if you walk away from Cossacks disappointed, then you’ve got very high expectations. Sure, the game isn’t perfect, and if you haven’t played Age of Empires 2 you’d be better off getting that. But if you lower the bar just a little and can put up with its quirks, you’ll see there’s a lot of fun to be had.
Graphics: Pretty sharp, low specs required.
Audio: Not bad, but nothing special.
Longevity: Pretty good, there’s loads to go at, especially with the multiplayer.
Originality: Straight out of Settlers, Age of Empires 2 and even Anno 1602.
Appeal: Age of Empires fans and 17th Century military historians.
Bugs: None encountered.
Packaging: N/A
Interface: Takes a short while to learn, and the tutorial does a good job.
Controls: Keyboard and mouse.
Multiplayer: 8 max (all PCs need CDs) via TCP/IP and IPX.
Pros:
Cons: