Cossacks beats them all! – Preview from Gamblexx 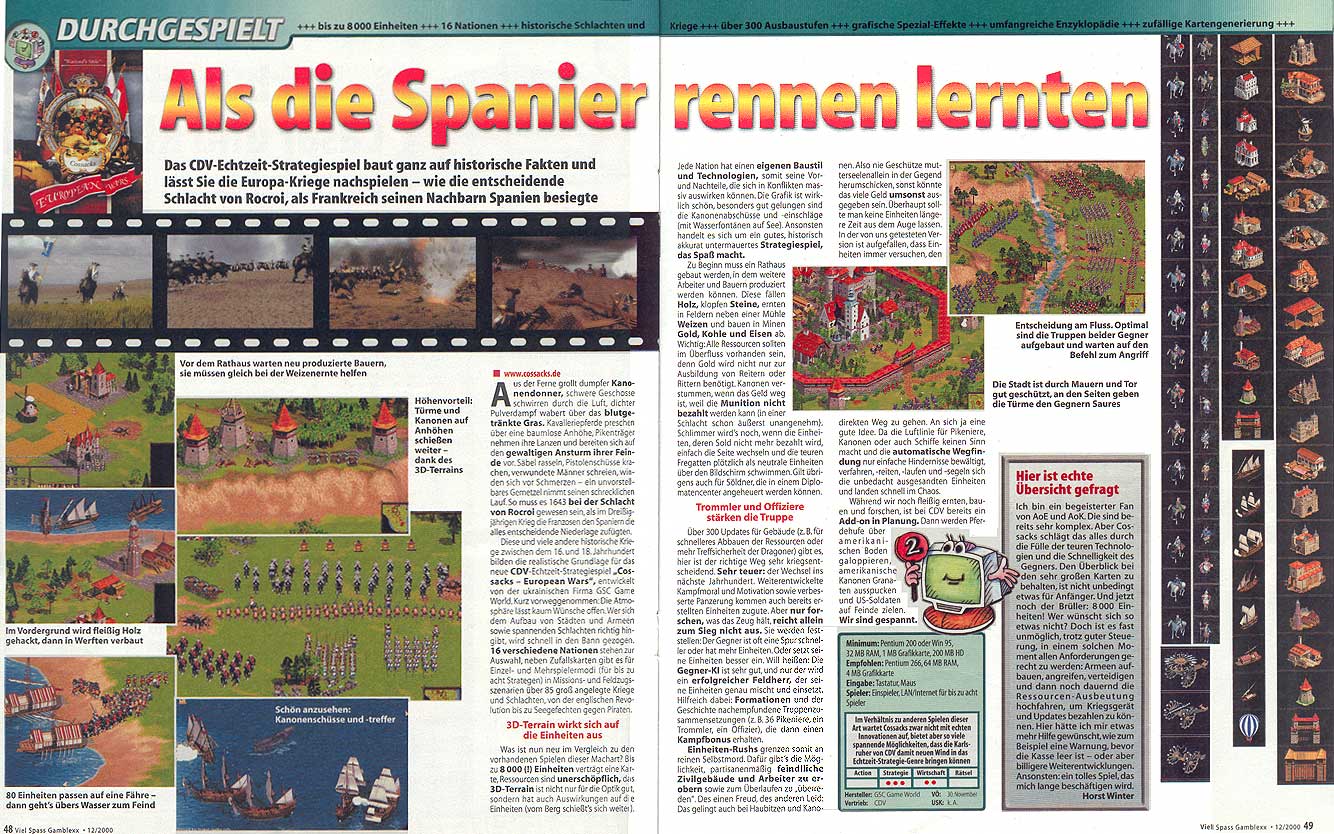 When the Spaniards learned to run
The CDV real-time strategy game builds entirely on historical facts and lets you re-enact the European wars – like Battle of Rocroi when France defeated its neighbor Spain.
Distant cannon thunder rumbles in the distance, heavy projectiles whiz through the air, dense powder vapor swirls over the blood-soaked grass. Cavalry horses dash across a treeless hill, pikemans take their lances and prepare for the massive onslaught of their enemies. Sabers rattling, gunshots cracking, wounded men screaming, squirming in pain – an incomprehensible slaughter takes its terrible course. This must have been the case with the Battle of Rocroi in 1643, when the French inflicted all-important defeat on the Spaniards in the Thirty Years’ War. These and many other historical wars between the 16th and 18th centuries form the realistic basis for the new CDV real-time strategy game “Cossacks – European Wars”, developed by the Ukrainian company GSC Game World. In a nutshell: the atmosphere leaves nothing to be desired. If you really devote yourself to building cities and armies as well as exciting battles, you will quickly be under the spell, 16 different nations to choose from, in addition to random maps there are single and multiplayer mods (for up to eight strategists) in mission and campaign scenarios 85 large-scale wars and battles, from the English Revolution to naval battles against pirates.
3D terrain affects the units
What is new compared to the existing games of this type? One map can take up to 8000 (!) units, resources are inexhaustible, the 3D terrain is not only good for the optics, but also has an impact on the units (shoots up to the mountain).
Every nation has its own architectural style and technologies, thus its advantages and disadvantages, which can have a massive impact in conflicts. The graphics are really nice, the cannon kills and strikes are particularly good (with water fountains at sea). Otherwise, it is a good, historically accurate strategy game that is fun.
At the beginning a town hall has to be built, in which further workers and farmers can be produced. They cut wood, quarry stones, harvest wheat in fields next to a mill and mine gold, coal and iron in mines. Important: All resources should be in abundance, because gold is only needed for the training of riders or knights. Cannons fall silent when the money is gone because the ammunition cannot be paid (in a battle it is extremely unpleasant), it gets worse when the units whose pay is no longer paid simply switch sides and the expensive frigates suddenly become neutral units float across the screen. This also applies to mercenaries who can be hired in a diplomatic center.
Drummers and officers strengthen the formation
There are over 300 updates for buildings (e.g. for faster mining of resources or more accuracy of dragooners), here the right way is very crucial for the war. Very expensive: the change to the next century. Developed combat morale and motivation as well as improved armor also benefit units that have already been created. But just researching what it takes is not enough to win. You will find that the opponent is often train faster or has more units. Or better use his units. That means: The enemy AI is very good, and only the successful general, who mixes and deploys his units exactly. Helpful tip: Formations and history-based troop compositions (e.g. 36 pikemen, a drummer, an officer) receive a combat bonus.
Rush units to the borders is a simply suicide. There is the possibility to capture hostile civilian buildings and workers and to “persuade” them to overflow. One man’s meat is another man’s suffering; This also applies to howitzers and cannons. So never send guns around the area alone, otherwise the large amount of money could be spent in vain. In general, you shouldn’t keep an eye on units for a long time. In the version we tested, it was noticed that units always try to go the direct way. In itself a good idea. Since the air line does not make sense for pikemen, cannons or even ships and the automatic path finding only copes with simple obstacles – riding, running and sailing – the carelessly sent units quickly land in chaos.
While we are still busy harvesting, building and researching, an add-on is already being planned at CDV. Then horse hooves will gallop across American soil, American cannons will spit out grenades, and US soldiers will target enemies. We are excited.
A real overview is required here
I am an enthusiastic fan of AoE and AoK. They are already very complex. But Cossacks beats them all because of the abundance of expensive technologies and the speed of the opponent. Keeping an overview of the very large maps is not necessarily something for beginners. And now the roar: 8000 units! Who doesn’t want that? But it is almost impossible, despite good control, to meet all requirements at such a moment: building armies, attacking, defending and then continuously increasing resource exploitation in order to be able to pay for war equipment and updates. Here I would have liked a little more help, such as a warning before the exchequer is empty – or cheaper developments. Otherwise: a great game that will keep me busy for a long time.

Nobody will make it! 1 new picture arrived

And now for the next black eye! – 2 new images arrived