You can read the first part of a very old interview in this post.
Interviewer: Steve Lieb
Anton Bolshakov of GSC Game World

Strategy-Gaming Online has secured an exclusive interview with Anton Bolshakov, of GSC Game World, designers of European Wars: Warlord’s Style (aka Cossacks). Following my detailed read of their on-site docs and FAQ info I posed a few (ha ha) questions to Anton about what EW:WS is really going to be like: (Please note we have no screenshots of many GUI screens as they are working on converting them from Cyrillic to Roman characters. We do have screenshots of play screens.

The EW:WS demo will be finished in April. Their url is http://www.gsc-game.com/english/cossacks/index.shtml

SGO: Hi Anton – thanks for taking the time for us. I read the docs on your site, and the first thing that struck me, of course, is the “8000-units” number – I presume that’s number of individual figures able to be “on the map” at one time?

AB: That’s right – 8000 units means the number of single units that may be on a map and take part in a battle. Any unit sprite in our game is never supposed to imply more that one real unit. After all, for instance, imagine if in AOE 2 one could set the unit limit not to 200 maximum, but to 8000! Let me add that such a great number of units and large maps is not a sort of any “AD trick” or something. We have developed such a powerful engine on purpose – because we wanted to make a really large-scale historical strategy. Such an approach has allowed, first of all, to bring the game events scale into accord with the scale of depicted historical ones. For example, AOE was announced as an “empire building strategy”, but the unit limit of 200 makes battles in AOE 2 much like conflicts between two villages, not empires. Secondly, the great number of units we have managed to take away virtually all restrictions of a player’s strategic plans. Now a player can do anything including what was not allowed with the unit limit of 200. One can fight at several fronts, attack using numerous types of forces, conduct distracting maneuvers and strike with major forces, etc. Of course such great unit limit implies our thorough development of interface and unit controls, military formations, and other features to keep the game away from being just a mess of many thousands. 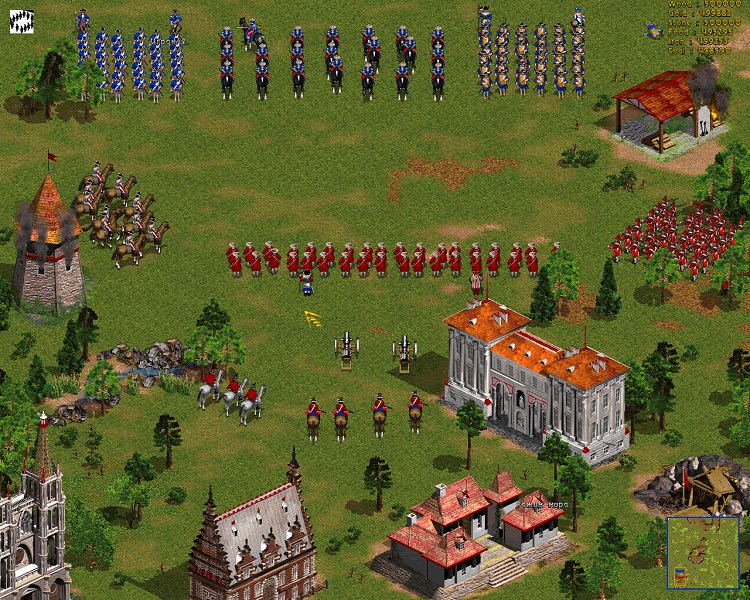 SGO: You refer to units in “formations” such as line, square, column. Can the be grouped into battalions/regiments for easier management?

AB: Let us consider military formations first. There are three formations in the game: a rank, a square, and a column. To create a formation, a player should have an officer and a drummer. Only infantry can fall in formations that may consist of a certain number of units only (15, 36, 72, 120, or 196 units for a column, 36, 72, 120, or 196 for a rank, and 36, 72, 120, or 196 for a square). For example, if you order 18 units to fall in a column, 15 of them assume column formation, and 3 stay individual units. If you order 18 units to fall in square formation, they won’t. After a formation is created, it can be controlled as a single unit. Units’ visual range, attack and defense points increase in a formation. A formation is dismissed if more than 60% of men, or if a player hits the appropriate key. Also cannons, howitzers, or mortars can be consolidated into a sort of formation, called Battery; you don’t need an officer of a drummer for it. Other forces, e.g. cavalry or vessels, cannot be out into formations. Using a group control, a player can easily line up them, but they stay individual units and obtain no formation bonuses mentioned above. Each formation type has its advantages and drawbacks defining the cases of their best performance. Formations introduce tactics in the game. Battles are not more a kind of mess where only a numerical superiority wins; they look like real battles from pictures of historical movies. With formations, such concepts as flanks, the rear, a frontal attack, etc. get a practical sense. A player may carry out tactical combinations using different formations and force types. In EW, a battle is not instant but takes some time. Thus a player can manage his forces before a battle and in the process of a battle. Competent use of tactical techniques along with combining advantages of several formations and force types will lead a player to brilliant victories over an enemy’s superior forces. The large scale of the game and military formations allow bringing about such game mode as Historical Battle where one can play over a famous historical battle reconstructed in details. As to your particular question, formations cannot be combined into structures of a greater level. To attack with multiple formations and forces one should control them separately. We have tried to combine formations into more complicated hierarchies, but it has turned out being too inconvenient and complicated to control.

SGO: Regarding flanks, does this mean that units can only shoot forward?

AB: Units attack the target a player has ordered to attack. However, if an enemy attacks from a flank or from the rear, units have to spend some time for turning to the enemy.

SGO: Is there an advantage to attacking the side or rear of a unit?

AB: No, there is not. There are no bonuses when attacking from a flank or from the rear. However, if cavalry outflanks shooters, it will reach them before the shooters can turn to the cavalry, so shooters will not have time to make a single shot!

AB: In EW, artillery has no special enfilade fire mode. An artillery cannon-ball can not cause damage before it reaches the target. After the cannon-ball hits the target, it explodes and causes damage to the target and to all units in certain vicinity to it (a splinter effect).

SGO: What about fore or aft shots to ships?

AB: No. Hitting any spot on a vessel hull or rigging causes the same damage.

SGO: Do formations block line of sight or at least fire of rifles and cannon?

AB: No. Only landscape irregularities, walls, and buildings are obstacles for shooting.

SGO: Individual units? What I am thinking of is using an unformed body of individual units as skirmishers in front of a formation to absorb cannon fire until they get close. Would this work?

AB: There are at least two ways in the game to use such a tactics. The first one is using units in metal armor against enemy shooters (e.g. using Raiders or Pikemen), because armored units are protected from bullets and splinters. The second way will work only against an AI-driven enemy and is more cheating than a honest stratagem. AI-driven shooters attack the most close target; thus, when you attack them, you can lead some cheap units in front of your major forces to attract enemy’s fire. Hence, you can then lead the major squad to the enemy’s shooters nearly unharmed.

SGO: Are individual units a little harder to hit than formations?

AB: There is no fire dispersion for shooters (unlike artillery), so shooting at one unit or at a squad is equally effective. Artillery possesses a considerable fire dispersion when shooting at a long range; thus artillery shelling is as effective as the target enemy squad is larger. Turkey and Algeria use Archers shooting with arrows. Bows and arrows have multiple drawbacks as weapons of the past epoch – e.g. fire dispersion and low arrow speed. Hence, Archers’ efficiency is also greater when the target enemy squad is larger.

SGO:. If you can organize them into units – what’s the maximum number of these “formations” that a player can have?

AB: I never had an idea that there is a limit! A player can create as many formations as he or she has enough units for. 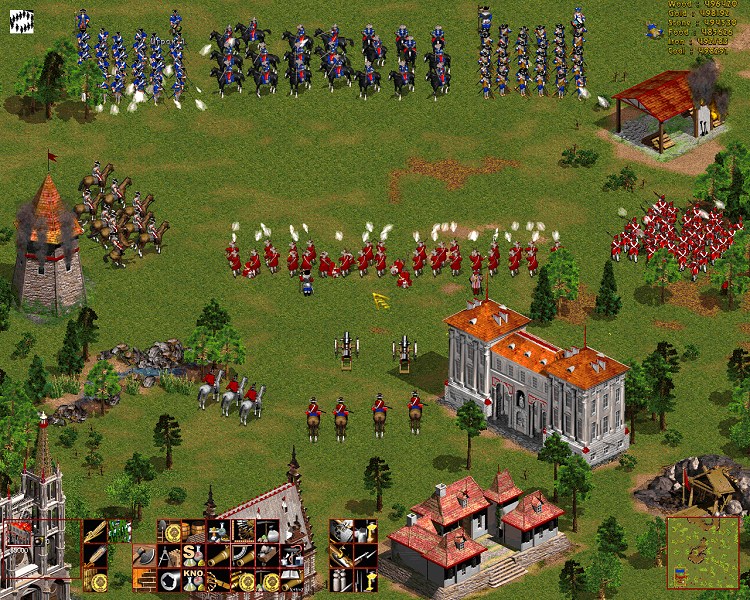 SGO: How can they be controlled? Hot Keys?

AB: A number key can be assigned to each formation. Thus, ten formations can be controlled via hot keys – numbers 0-9 of the keyboard – or via interface. Other formations can be controlled via interface only. The formation control interface section consists of icon series. Each icon depicts a unit a formation was created from, a number of units in the formation, and the formation ordinal number. As a player moves mouse cursor over such icon, the appropriate formation is highlighted on the main map and the minimap. And vice versa, when he or she moves the cursor over a formation on the main map or the minimap, the appropriate formation icon is highlighted. Such interface is quite convenient and allows fast and effective formation access and control.

AB: Indeed, in a real battle it is critical is cavalry in formation during its charge. However different formation types do not seem to deliver any considerable advantages. Thus we did not make formations for cavalry. However your cavalry is formed up, its main advantage is high speed and the fact that fighters are mounted. These are considerations that were out into the game. Firstly, there is an organized cavalry and an unorganized one. When you control a cavalry group, they fall into a sort of line automatically; though the units stay individual and do not get any bonus. Secondly, cavalry moves faster than infantry, and possesses better attack and defense parameters. In EW, vessels cannot be put into formations too. Again, there are two variants of an organized fleet and an unorganized one. When you control a group of ships, they fall into a line automatically, but stay individual units and do not get any bonus. Of course, real battle tactics and strategy are far more complex that those implemented in EW. However, when one creates a real-time strategy, one always reaches a limit of the game complexity one should not exceed (unlike turn-based strategies). This is the reason why many formation aspects and tactical peculiarities of this or that force type were not implemented.