Cossacks: European Wars (buy it), developed by German juggernaut CDV and published by Strategy First, was an international hit when it was released last year. World wide, it sold more than a half million copies, and made a modest name for itself in an already over saturated RTS market here in the United States. Due to the international success of Cossacks, the gurus at CDV have seen fit to release an expansion, aptly Cossacks: The Art of War (TAW). Luckily for RTS players, this expansion improves what was already a solid game and elevates it to almost great status. The key word in that last sentence is “almost”.

Out of the box, you can tell that the same amount of care has gone into TAW as was put into the original release. In the first installment of Cossacks, the manual was encyclopedic in size and scope, and included tech trees for each of the original sixteen nations. The small manual included with TAW details every new facet of play, including the new units and new multi-player features. It has also been written and edited better than the first manual, which suffered a bit in the translation from the original German.

Once the player has (hopefully) glanced through the manual and installed TAW on their machine, they are shown the same introductory movie and opening screen as in the original release. Although not very important, this lack of any new bells and whistles in the introduction left me a little disappointed.

Once I had stopped whining about the lack of any new introductory material, I fired up a new single player game. Call me anti-social, but when it comes to the RTS genre, I prefer single player games to those involving other human beings.

When the player is taken to the single player set-up screen, a few new items automatically make themselves known. The most obvious addition is that of the two new playable nations, Bavaria and Denmark, each with their own unique units and architecture.

Of the new unit additions, the naval units are the most impressive. The smaller ships include a cutter for patrol duty close to home ports and a more heavily armed ketch available for shelling enemy shore defenses.

Other new naval units are split between what appears to be the Muslim and Christian naval powers of the 17th and 18th centuries. These include the Turkish yacht, which is larger and better armed than its Western counterpart, and the Venetian galleass, which is also more powerful than any comparable galley found in any other contemporary navy.

In addition, there are new, powerful 18th century versions of ships from the original Cossacks. These include the frigate, one of the strongest naval units that can be constructed in the game, and the Victory battleship, named after Lord Nelson’s famous flagship. The battleship is the most devastating unit that can be constructed, equally dangerous to both land units and other naval units because of the amount of cannons it mounts (more than one-hundred), and their extraordinary range.

A curious item that I noticed about the naval units in TAW, not documented in the manual, is that not all ships are available to all nations. It appears that if a nation was traditionally a land power in reality (e.g. Austria, Russia), then the strongest naval units are not available to them. This makes the gaming experience more realistic but might not appeal to some players. 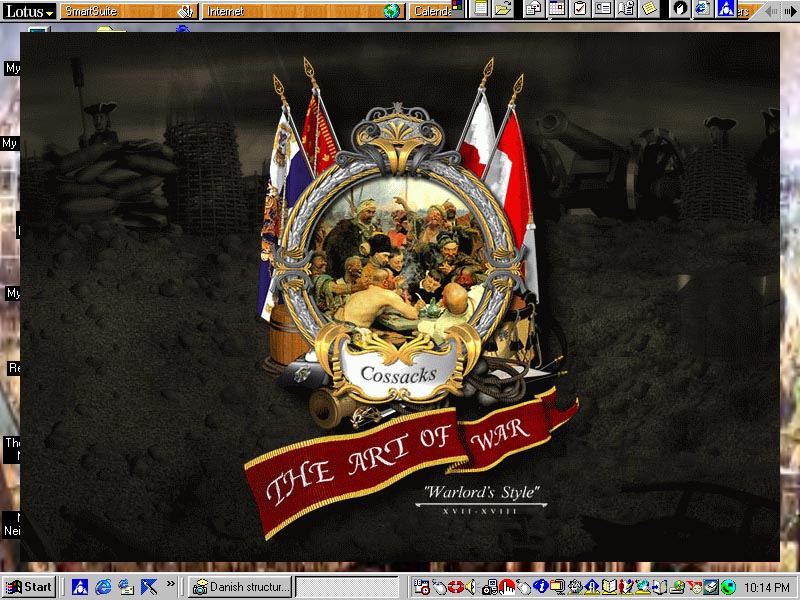 If blasting away at huge enemy fleets is not your thing, then there are a few new land units to consider. Both Bavaria and Denmark have their own versions of the 18th century musketeer, arguably the strongest type of infantry trooper available in the game. Most other land powers also have their own musketeers.

A new cavalry unit, the Prussian hussar is also included. This is an 18th century mounted trooper armed with a saber that is ideally suited for slashing through enemy infantry formations.

There were many niggling little things in Cossacks: European Wars that kept the game play from being totally engaging. One major annoyance was the inflexibility of game play options. Rest assured that this inflexibility has now been modified with a host of new choices and available adjustments.

Options range from the minute, like being able to choose a specific player color, to a host of start up features that make the game much more flexible and interesting. These range from default game settings, in which the player starts with nothing but a small group of peasants, through to the “different nations” option, which lets you build military and civilian structures of any nation in the game. Different pre-built defensive formations can also be set up, such as an intricate defensive network of walls and towers or an arsenal of cannons and howitzers.

New log cabins have also been introduced, used in games where the player starts in the 18th century with a standing army. Log cabins bolster the defensive capability of walls and towers by adding the firepower of ten infantrymen, housed in the cabins.

The player can even select which options can become available or not over the course of the game, making it as realistic as desired. One extremely welcome option is the ability to adjust the capture options. In the original Cossacks, one of the most annoying aspects of the game was for the player to spend hours painstakingly constructing his capital city, only to see it captured and overrun by a lone enemy cavalryman. This possibility can now be eliminated completely or restricted to the specific capture of peasants, town centers, or artillery, considerably lowering the frustration factor.

Units have also been given a new set of actions to execute, including “patrol” and “guard”, which were unavailable in the original Cossacks. Artillery can also be ordered to fire at a spot on the ground rather than at particular enemy units, good for plugging up those hard-to-defend, front-line areas.

My personal favorite is the introduction of the “peacetime” option, a pre-chosen amount of time (up to 4 hours) where no offensive actions are allowed. If any army moves to attack another, its troops and resources are destroyed once they get too close to the enemy. This new system eliminates any rush tactics that either pesky computer opponents or scheming on-line opponents may be contemplating.

New random maps have also been included, some of which are absolutely huge, (16 times the size of the largest original maps), requiring at least 256 MB RAM for effective play. When using some of these larger maps I did experience in-game slowdown, but my machine is 4 years old and definitely no longer top of the line. Newer rigs will probably not experience this slowdown.
All functions, new and original, can now be given in pause mode, something that many Cossacks players were looking for in the initial release.

One odd problem I did experience was the lack of any in-game music. I tried a host of different adjustments to make it work, to no avail, but the sound effects did work fine and are an improvement on the original. I realized from this one bug just how much the music contributes to the atmosphere of any game. However, this didn’t ruin the experience quite as much as it could have. I can’t offer an explanation.

Although multi-player isn’t really my thing, I did notice that the most notable new feature of TAW multi-player is the “global rating system”. This is a system of victory points and possible awarded points when a specific on-line opponent is defeated. These numbers are tallied and arranged in points order, with each player assigned a rank ranging from esquire (lowest) up through king for a total of nine different rankings. Coats of arms and even individual player icons can also be created when playing on line.

Other common on line features are also present, including resource sharing between different players and alliances between both AI and human players. With these new options available it will hopefully be easier to find more willing opponents than it purportedly was with the original release.

The original Cossacks AI was notoriously efficient and cold-blooded. It was so much of a challenge, in fact, that playing any more than one other opponent was nearly impossible. Again, adding adjustable difficulty has thoroughly improved this aspect of the game. On the set up screen players can choose from easy, normal, hard, or very hard settings. I found the AI to be a pushover on the easy setting, to the point where I could roll over 5 or 6 different enemy powers with ease. The normal setting was a challenge but not overwhelming, and a solid, well-paced game was usually the result. The hard setting was just that, hard. I tried it a few times and found myself unable to defeat multiple opponents. Even one opponent set at this level can become an omniscient superpower, seeing all and having no mercy. Having met my match I didn’t attempt to use the very hard setting at all.

The Art of War expansion definitely knocks the Cossacks experience up a notch from “good” to “great”. Some reviews of the original said that it was nothing more than an Age of Empires clone set in the 17th and 18th centuries. To that, I say “fantastic!” Personally, I couldn’t ask for a more engaging time period in which to set an RTS, and if it is heavily reminiscent of the Age of Empires series, so what? Was it not one of the all time classics? The additional options, nations, and units all make Cossacks a truly great investment for the historically tilted RTS fan. These, together with the new game play adjustments make this version of Cossacks more deserving of your hard-earned gaming dollar than the first incarnation. If you didn’t pick up Cossacks: European Wars because of some less-than stellar reviews you may have read, then try it with The Art of War expansion. It may be just what you’re looking for.

If you were a fan of the original and haven’t picked up the expansion, what are you waiting for? It will only give you more of what you loved in the first place. It doesn’t break any new ground, but it definitely builds on the strengths of the original game. Cossacks: European Wars, when combined with The Art of War, doesn’t make this franchise quite a classic, but it does come very close. Who knows what CDV has up their sleeve for their next expansion set, Cossacks: Back to War?, which is set to be released this summer. Perhaps they will then finally attain that oft sought after badge of “classic”.